Making a Doctor Plague Mask was something that has been in the back of my mind for already some time, and this year due to COVID, and having read more about these characters, their function, and their masks, I thought about this project again, but without a clear plan. Even quarantining ourselves non stop since march, it’s sometimes difficult to find the time for sewing. Quarantine hasn’t been hard for me, quite the contrary. II miss seeing my family and being close to the sea, but I find plenty of happiness doing things at home. I finally improved my ukulele playing, started to seriously declutter our home, and also enjoyed spending more time with the birds. For once, it was nice to avoid the need to give excuses for not going out. Weird, I know. 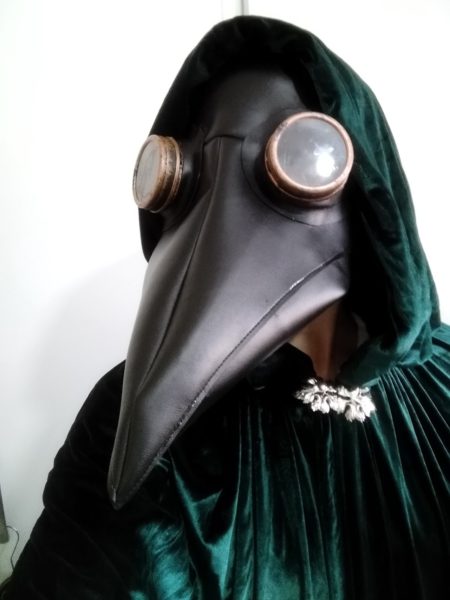 I’ve been working from home for a while now, so this didn’t change my daily life much. Koen is also mostly working from home, and we’ve adjusted fine to this change. It’s nice to have lunch together every day while we watch some sitcom (we’re now rewatching South Park). Everyone working at my work is remote right now. There were some people working at the office in Omaha, but everyone is now working from home. We’re lucky to work for a company that cares so much about its employees, and there have been plenty of online events to keep us connected with each other. I have to say that it’s been quite a lot of fun! So this week they organized a costume contest and a mini Halloween party via zoom. It was the deadline I needed to start sewing! 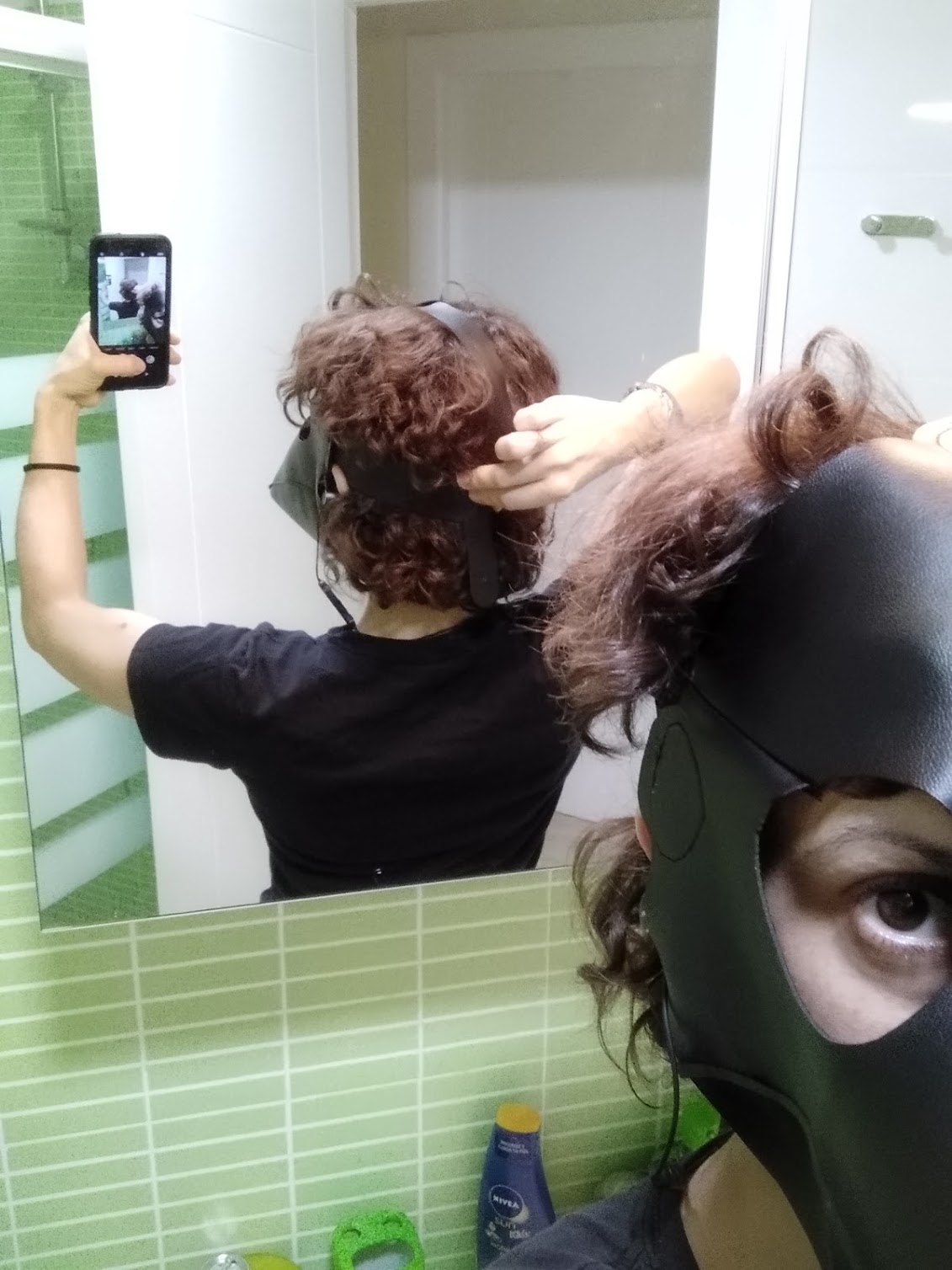 I used this free pattern from the Instructables site, but I used some black pleather I already had at home. I had several pieces of this stuff in black and brown, bought like a million years ago to use it in cosplay projects that never got materialized. It had plenty of wrinkles from being folder all these years but ironing on low on the back worked well. 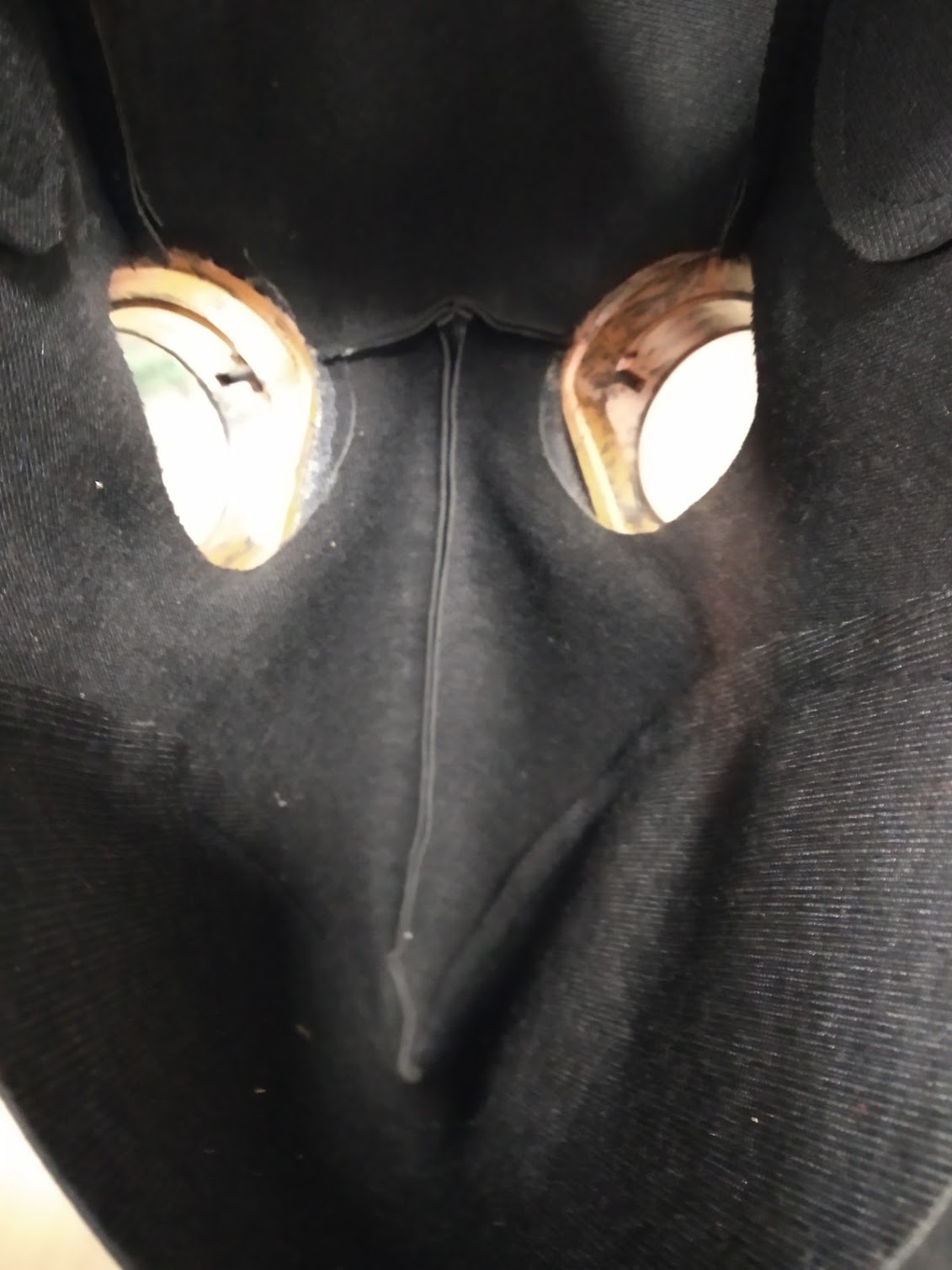 I don’t have many pictures of the process, even though the cut pieces were laying around for some days in my sewing room, but as I was on a deadline, I used almost every moment to actively work on it. I realized about the lack of pictures almost towards the end, and took some to redeem myself. 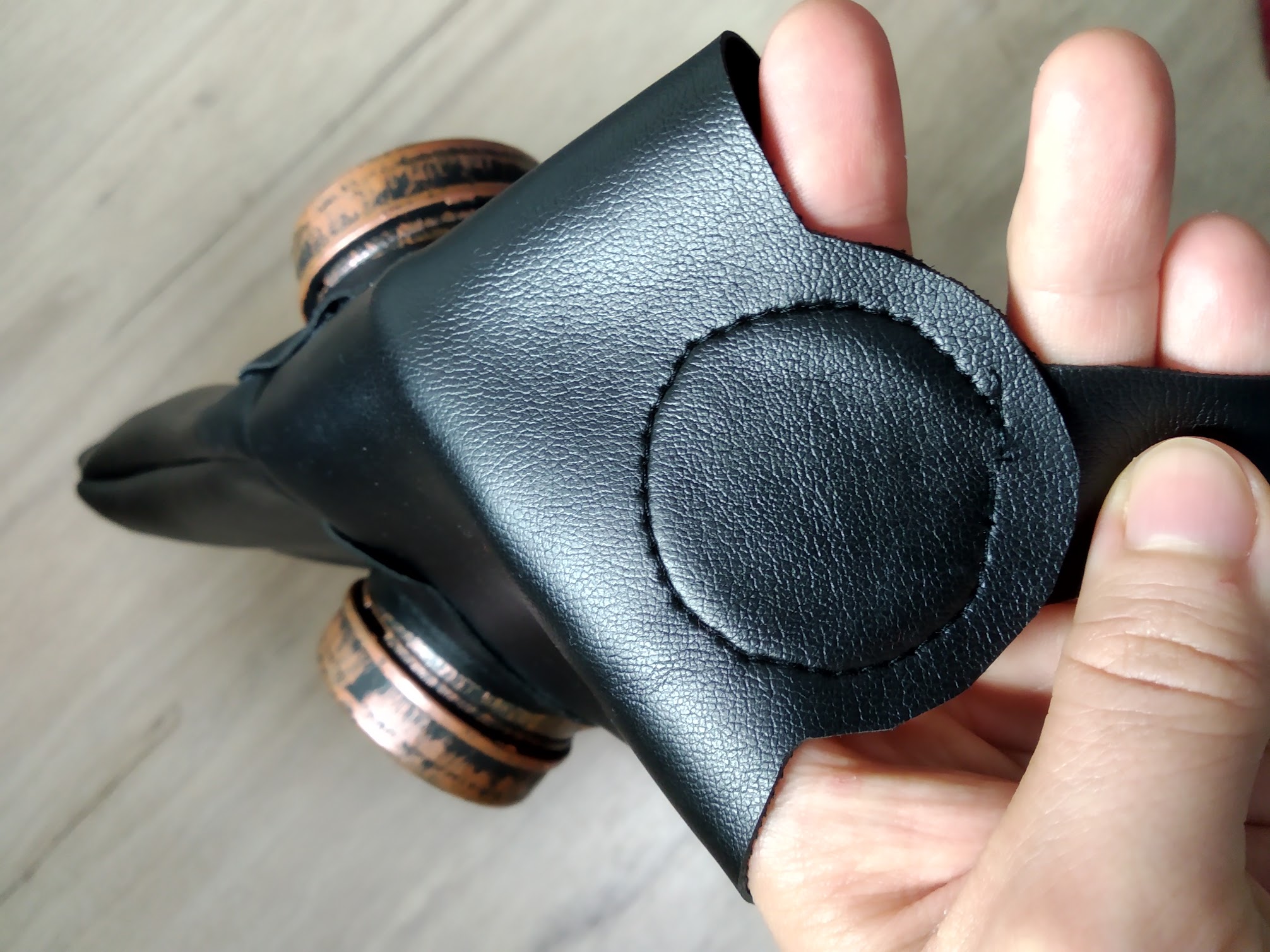 As I was using thin pleather, I was able to construct this by entirely using my sewing machine. The original design calls for rivets and a buckle, but I was able to sew all parts and even skip the buckle and a couple of pieces because I have a small head. 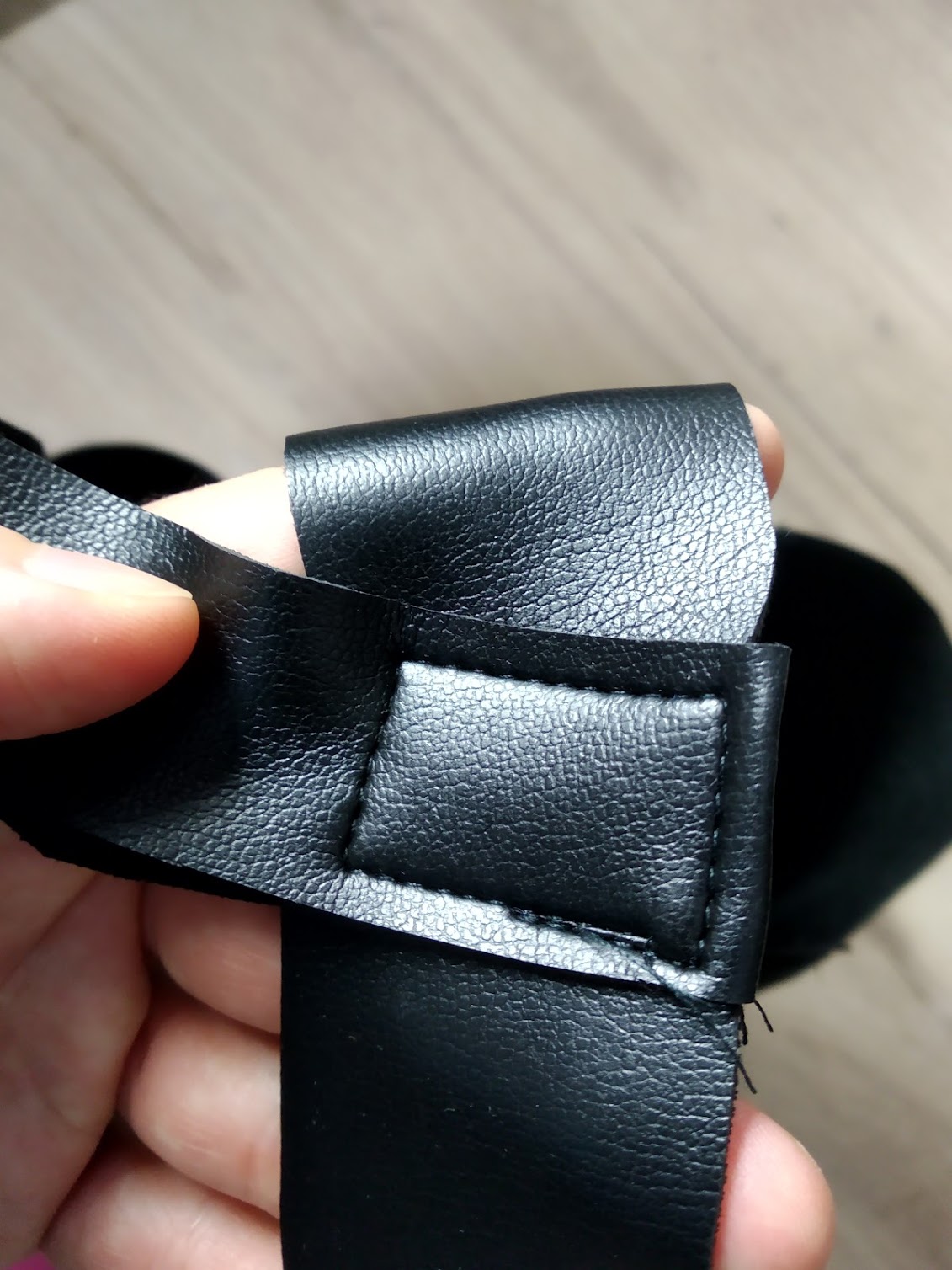 I was going too make the googles myself after seeing some tutorials, but I was on a deadline, and didn’t have much time, so I purchased a cheap pair at the bazaar downstairs and thought of a way to incorporate them into the original design. 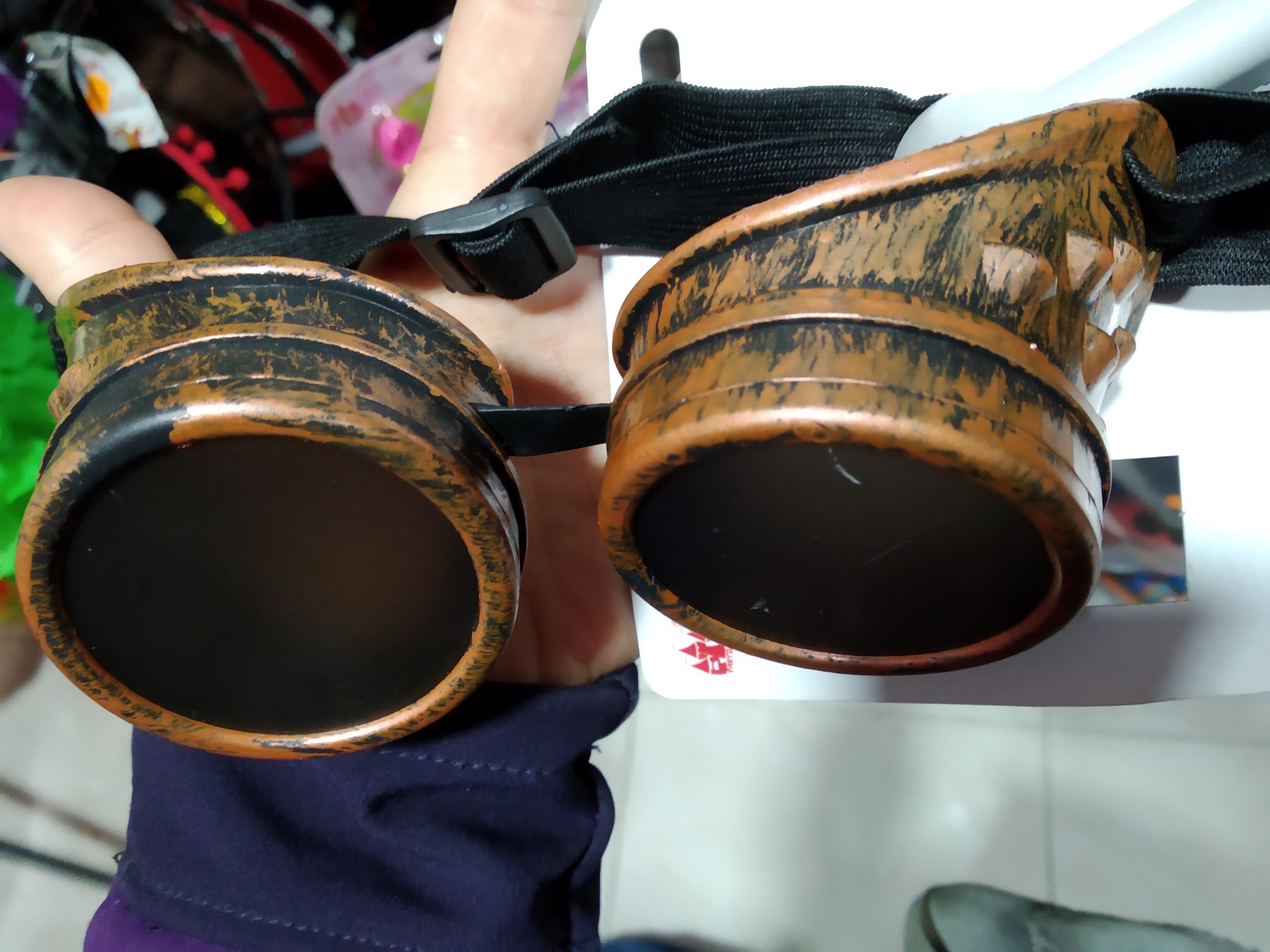 This part is differently done on the original design, but I wanted to avoid hand sewing so I sandwiched the googles between the vents and the mask and just glued both pleather pieces leaving the googles encased there. 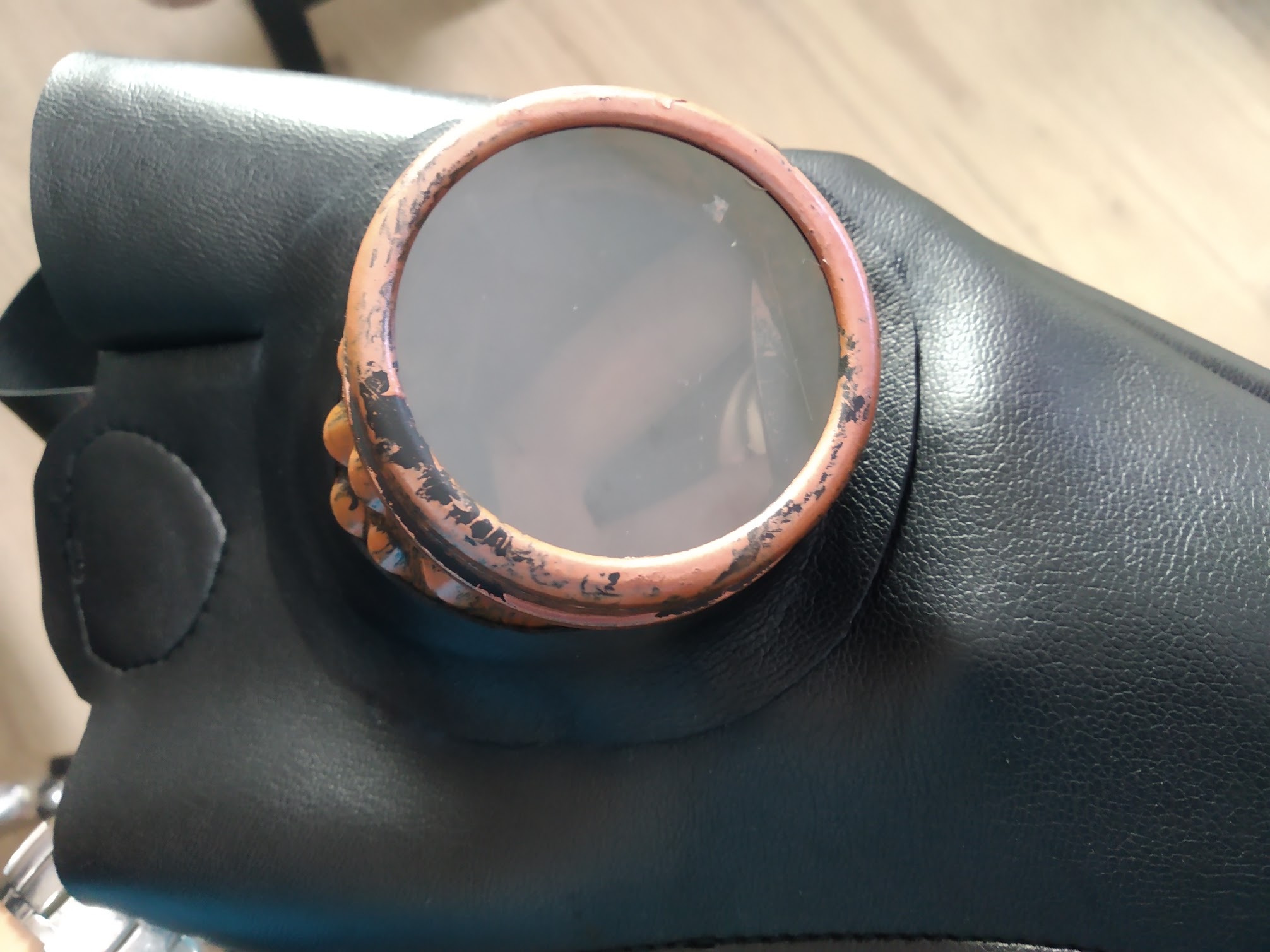 The original lenses were brownish and foggy. It was impossible to see anything with them on, so I removed them and cut new ones from a plastic box that contained almonds. 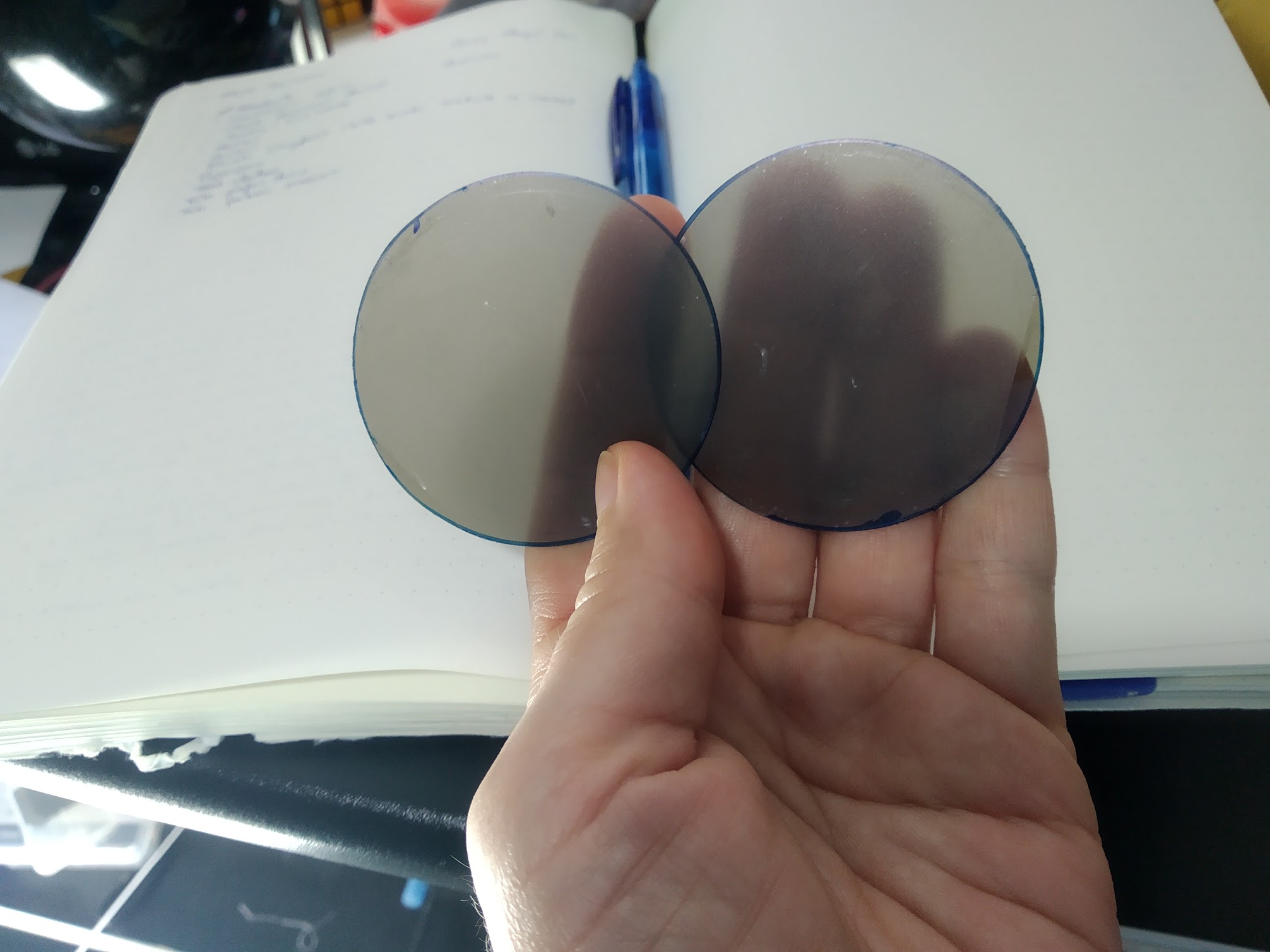 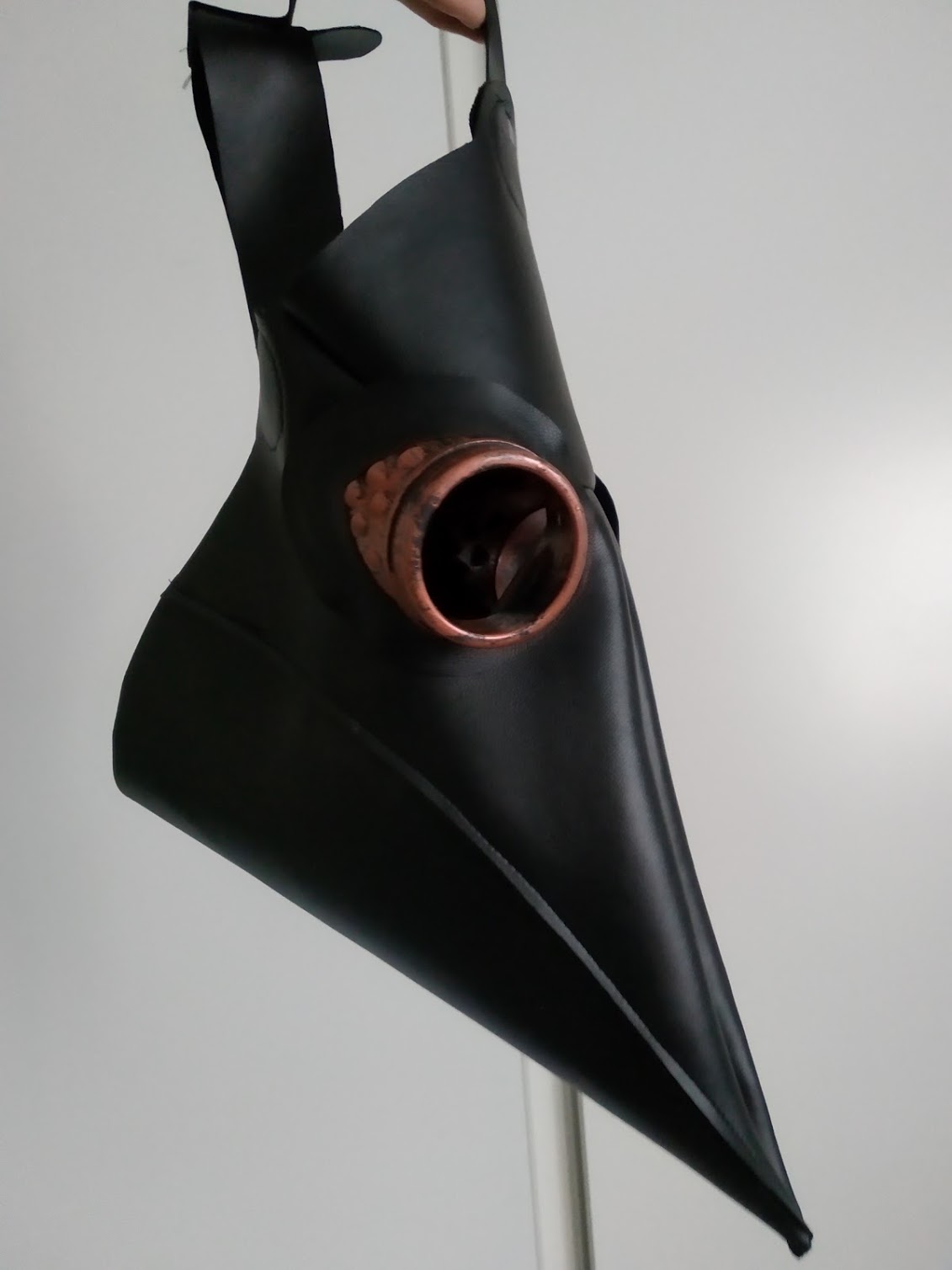 It was a fairly easy project, without any important mods. The only changes were done to simplify the original design. I wish the pleather was a bit stiffer so that the mask would keep its shape but for a low-cost costume, this was unbeatable. The cape was an old make from about twenty years ago when I joined the Spanish Tolkien Society. 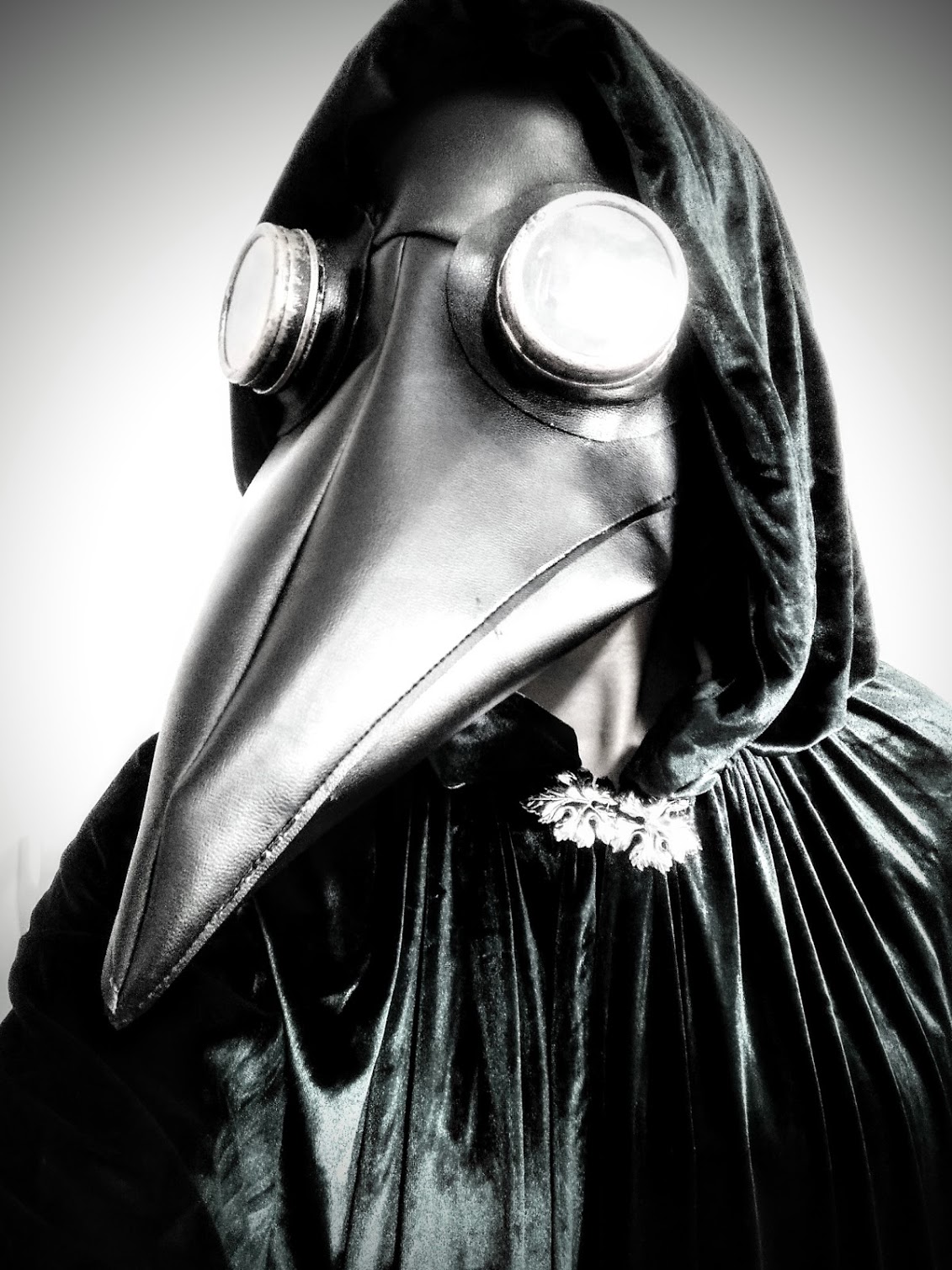 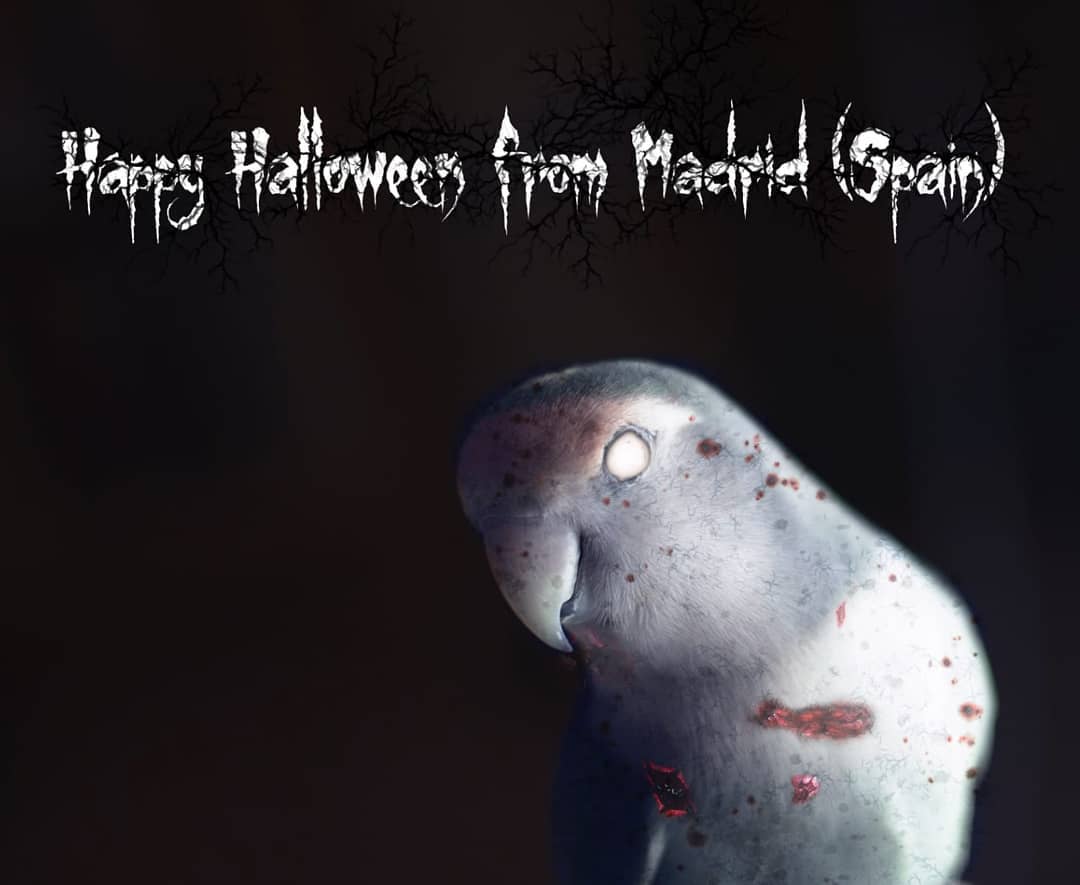