I started this project while my mother was at the hospital due to surgery, almost at the end of September. One of her parathyroid glands had to be removed and the doctor informed us that this was an extremely easy operation and after a couple of days my mother would be happily at home with very little pain and a tiny scar at the base of her neck.

But as you know, thing tend to come out totally different from expected.

The operation lasted for four hours, she lost two littres of blood and had to stay in Intensive Care for two days. Her blood preasure reached alarming values of 5-2 and they had to stuff her with liquid to raise it. The first time I could see her she was crying with pain and her conscience was fading due to morphine. She doesn’t remember those days and I’m sure it’s for the best.

After two days they took her upstairs to her room and soon she started to have breathing problems. I remember a night that she could barely breath. She thought she was going to die. The next morning the doctors found out that what she had in her lungs was the liquid that they’d been stuffing her for the previous days. She was also completely swollen and couldn’t even bend her fingers. They also said that due to the respiratory problems she could also have a heart failure. Believe me, each of the ten days that she stayed at the hospital, we had a brand new surprise that made our hearts sink.

And all that without taking into account that they couldn’t find the gland they were looking for, and they even had to cut more than it was foreseen… for nothing. They also cut part of her sternum and even today she has pain and has problems to sleep on her side.

The surgery left her a scar in her neck bigger than we expected. A bit T.

I then understood that me spending days and nights beside her bed was not enough. I needed to knit my love into something that could be useful and use my efforts to make her come back to us. So I decided to knit Ishbel. 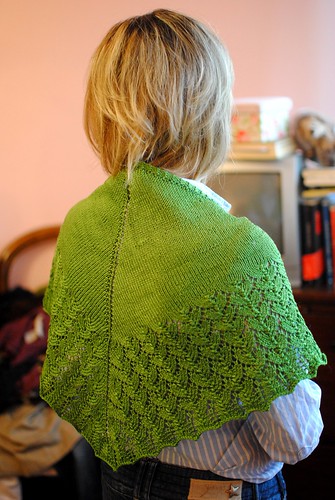 This being my first lace pattern and because of the situation, I miscounted here and there and I had to unravel the lace part. It’s when I learned the use of guide lines and took a short break just when I came back to Belgium. It’s not a very good idea to knit a lace shawl with yarn made out of cotton and rayon after spending hours sitting in a room of a hospital with low light and your mother suffering.

I started over the lace part and the second time I could focus more than the first.

I finally finished it during my following trip to Spain in October and blocked it there. After hating the knitting and the yarn used several times, I have to say that I am very pleased with the result and it was worth it.