Two birthdays ago I got from Koen the set of interchangeable wooden needles from Knit Pro. They are absolutely lovely. I’ve been using nothing else since then, except for socks, for which I need smaller needles. But I have an issue with the smallest needle of that kit, the 3.5 mm. When working with those the first time, with a non elastic yarn (cotton and rayon), a lace pattern and lack of experience, one of them snapped. I tried to glue it but the join was never smooth and I got very upset.

I bought another pair of needles later on but I misplaced them at some point, like some of my yarn. So I decided to buy a new pair. As they are impossible to find here in Madrid, I ordered them from Tejeme, like the first time, with another 3.75 mm pair, a size I did not possess yet. When I received them today, I noticed a very small difference. The 3.75 mm needles look exaclty like the other ones I have, but the 3.5mm are a little little bit different. The cardboard says Knit Pro Symfonie and instead of bright pink, the border of the cardboard has similar colours to the needles. When holding the needles, the colours are similar to the other ones (perhaps a bit paler), but the surface doesn’t look exactly the same. This one is a tiny little bit more rough that the previous ones. When knitting you can feel them also a little bit less smooth on the yarn and it slips differently, but it’s possible that will change over time. 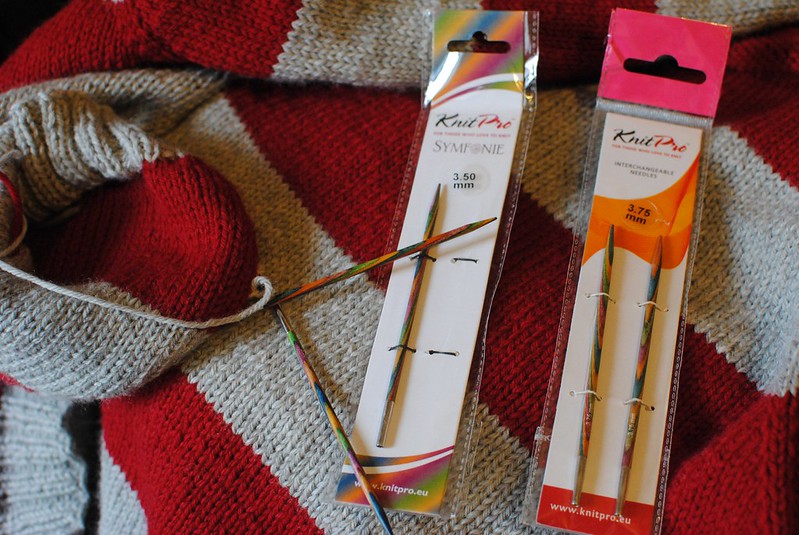 I’ve checked their website and it seems this is the new line. The same set I have, which just says Knit Pro for those who love to knit, is now called Symfonie Wood and I assume the characteristics of the needles are the same of this pair I got today. Has someone experienced this too?