We came back from Tenerife on Saturday evening, and since then I couldn’t stop feeling a deep angst. That I found a lot of work on Monday didn’t help to calm my stress. I felt like a week away from the internet had left me with a never-ending to-do list. I also had problems to sleep. It’s like it was all in general and I couldn’t put my finger on the exact item to start straighten out the situation. But I think I finally got it. It consisted of two things:

First the weaving ends and finishing pockets on Émilien. I was a bit worried about how to achieve what I wanted but after a couple of YouTube videos and some time with my darning needle it looks great. It’s blocking now and the next step will be sewing the zipper. I am not 100% sure about how to do this, but I have a couple of ideas that I’ve checked out on Ravelry. I’m not too worried and I know this cardigan will be finished at the end of the week. 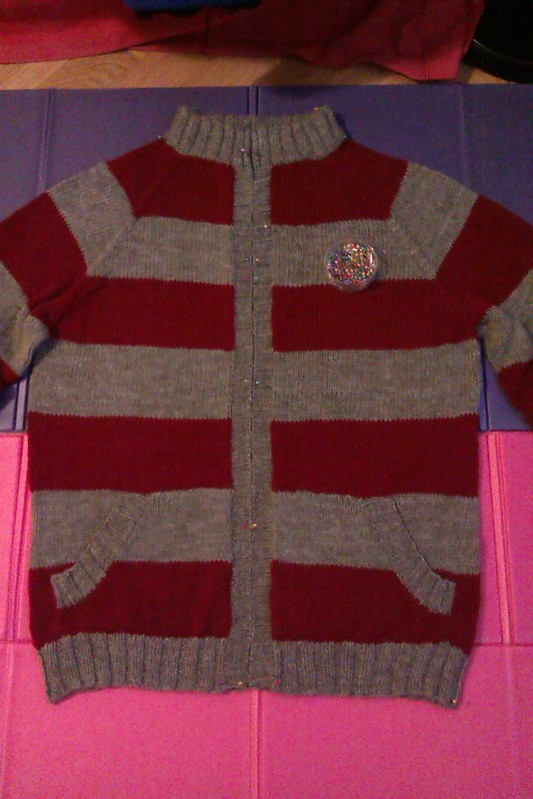 Another thing that troubled me but I didn’t want to think about (at least consciously)  was Freija. I had stopped working on it for a while to work on Émilien and a couple of little projects and I needed to do some recounting. I slightly modified the pattern to narrow the sleeves and I was thinking that I was going to narrow a bit the neck. I was busy with this on our plane back from the islands, after spending 3 hours on buses and you cannot imagine how tired. Sitting in the plane, checking the pattern, counting, estimating and even trying the cardigan while I was on my seat (Koen was astonished). Well, when one does things like this, so tired that one cannot even count to three, one can expect that things are not going to turn out as they should. Yeah, I screwed it up. If I continued, that could probably fit a swan with a very slim neck, but not me. We arrived home and I realized my mistake. I threw the cardigan on a corner and decided to start weaving ends on Émilien. I was very bothered by that unfinished screwed-up orange cardigan and I didn’t even want to look at it. Until today. I finished weaving ends on Émilien, turned off any other possible distraction (Gilmore girls) and gave it a deep  thought. I’m finally back on track, I’m tired but I think I have peace again. 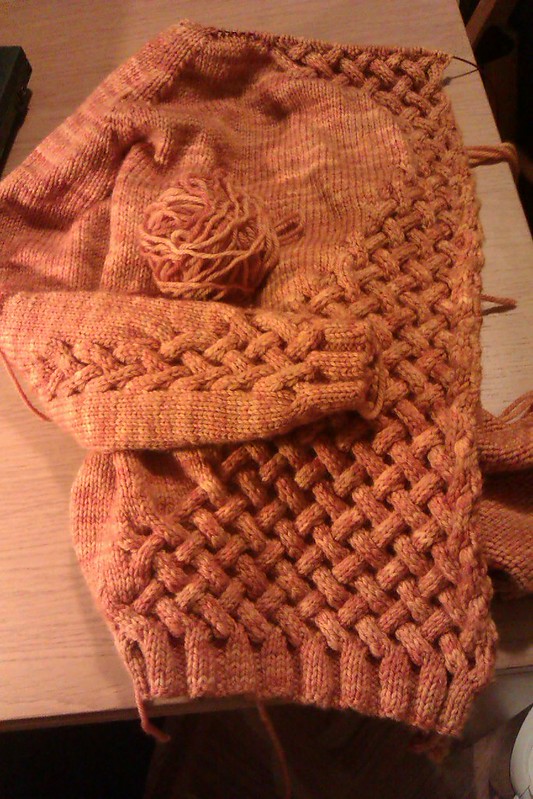 I think I’ll have both cardigans ready for the end of the week and now it’s time to check my queue again and find out what I want to make next. After so many months of non-stop queuing I have no idea of what I want to make. So many interesting projects that I don’t know where to start. I will have some yarn left from these two major projects so I think I will look for something small to use it. I should also make another pair of socks for my mother (the one I made has holes after so many times she wore them). At the end I know (who am I trying to lie to?) I will embark on another ultra complicated but gorgeous project.

Note: Just forgive me for these crappy pictures taken with my phone. I think I got enough stress for these two days. I promise I will post better pictures when I finish.