I’ve came to spend the weekend with my mother. She’s finally coming out of the pneumonia, but still, I wanted to come and visit her. She’s staying  these weeks with one of my aunts at the house that used to belong to my grandparents. The weather is usually worse than the one in Vigo and much worse than the one in Madrid. It’s cold and damp for the most part of the year. If you don’t pay continuous attention, you’ll have black stuff growing everywhere. As you see these are the ideal conditions for an asthmatic and a dust mites allergic like me. The town is small and oppressive. It’s the kind of place which is loved by children, because they can play outside, but then left by teenagers and young people because it’s just too small and there aren’t enough jobs. Most of the people I see on the street are old relics from a time long gone. There are some abandoned houses covered in grass, lichen and more of that black stuff.

Arriving there by public transport is exactly like when my mother was a child. Three daily buses run from it to the capital of the region, and then you have to take another one to reach the airport.

The house is big and it feels empty. The big living room, my grandmother bedroom and the bathroom she used are at the end of the house and those are areas seldom visited. It’s strange how a place can change so much from my childhood days, full of pleasant memories to the one that it’ve become now, empty and dark. I have to confess that I don’t come here as often as I should, but remembering the last months of my grandma here is so painful that my memory just can’t go there.

I made a short movie about that some years ago as the final project for my studies of video. I should add subtitles, since it’s in Spanish, but there’s very little dialogue, so I think it can be easily understood. I promise I will add subtitles soon.

I finished the Clapotis in the plane going there. While I was working on it one of the stewardesses approached me and knelt to my side (I had aisle) and asked me if the security guys had let me pass with those needles and what they were made of. She was touching my KnitPro wooden interchangeable needles while saying this. I was surprised, since this was the first time I was questioned about them. I explained that they were made of wood, but I couldn’t add more because she came out to explain that she was also interested in knitting while flying but she was not sure whether she could get the security check passed with her needles. Imagine my face when a stewardess asked me for advice about carrying knitting needles in a plane. She then told me that she’d just had a baby and he was allergic to wool, so she was looking for nice cotton to knit him some things. It was a very nice moment and I hope the information I gave her will be useful to her. I’ve never thought of it, but I should maybe make some little cards to give away in situations like this. There’s a group in Ravelry about this, but I had a hard time to explain it to her, since she didn’t know about Ravelry at all.

And here you have my Clapotis. I apologize for the quality of the pictures, but I couldn’t pack the SLR due to the strict policy the airline has with carry-on baggage (max 10 Kg and 1 very small bag where you need to fit everything, including your handbag). I didn’t want to check in a suitcase for such a short weekend and for the sake of being fast at the airport. 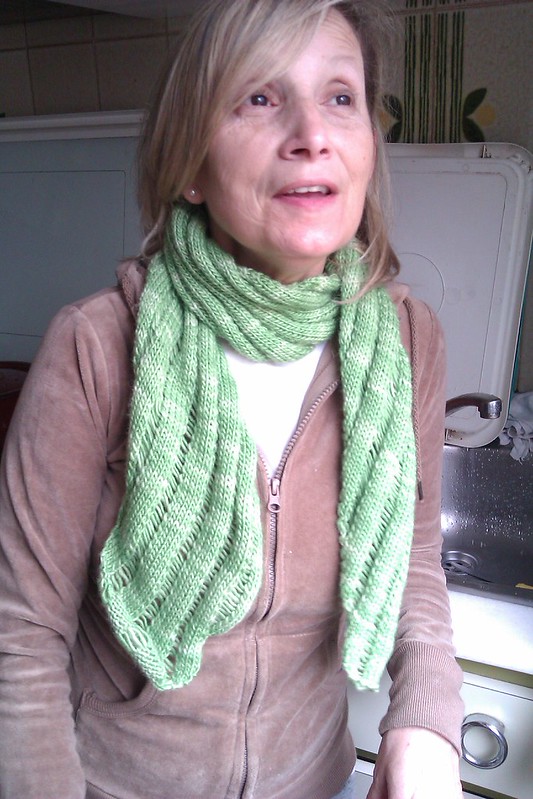 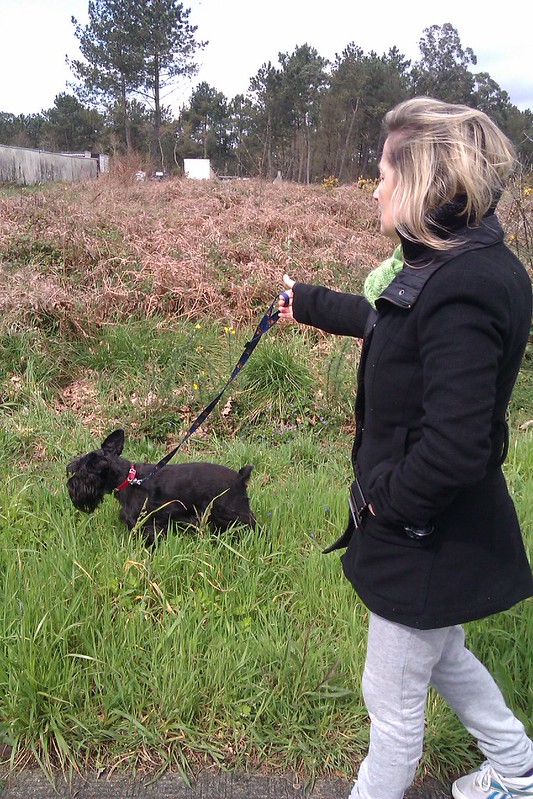