You know how men stuff their jeans pockets. I guess it’s the collateral effect of not carrying a purse like we do, where you never know what you can find at the bottom. In their case what you can normally find at the bottom of their pockets are their keys. Koen carries around a gianourmous amount of keys: from our place, from his office, his lab, and I’m sure also old keys he doesn’t even remember. The result of carrying this around is a hole in one of his pockets. 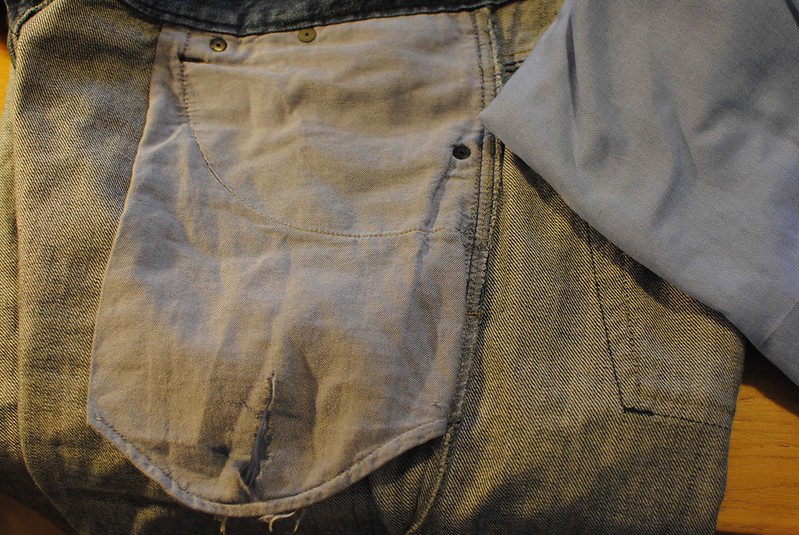 I first thought I could darn it, but I then checked the other side. 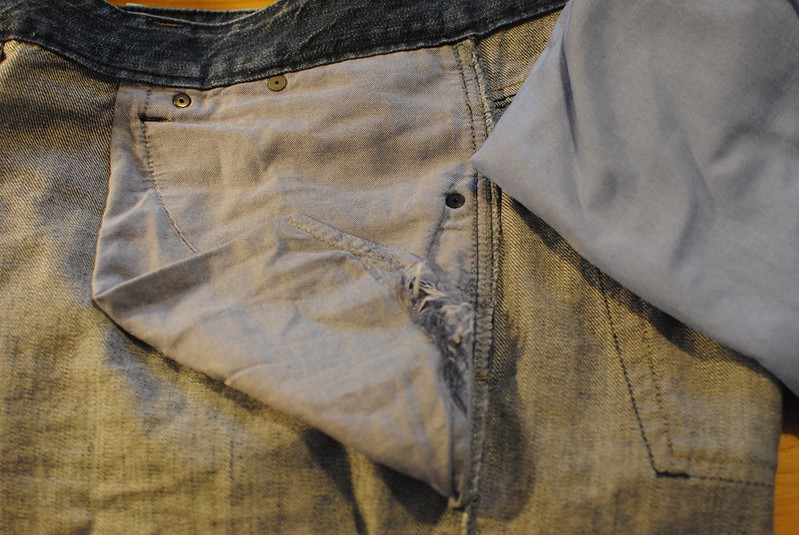 And I realized this was beyond mending. The cleanest solution would be unmounting the whole pocket and replace it with a new one, but for that you need to reap part of the lateral pants seam and then sew it again, and I was not sure I was able to do that. Denim is quite hard and I don’t know how my machine would manage several layers of it. It could have worked out but I was so afraid of ruining a perfectly wearable pair of pants that I decided to take the middle way: I was going to reconstruct the pocket. I confess that I delayed this for a while, because I was not sure how it could result and whether I would be able to finish it in a satisfactory way.

I bought a very similar fabric to the one used in jeans pockets and I decided to cut the bottom part of the pocket, being careful to keep at least a an inch an a half of  the bottom from the side seam (don’t cut it too close to the side seam). 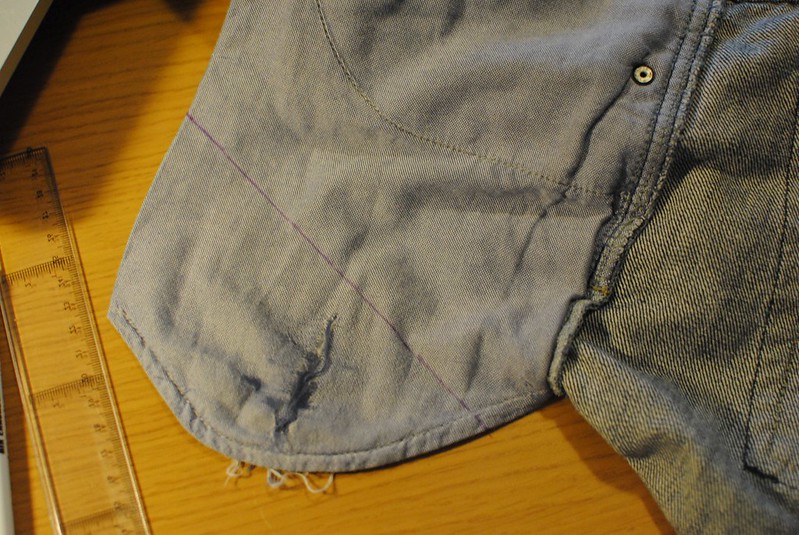 I used here an air erasable pen. I doesn’t really matter what you use here, since nobody will see it. Then you breath deeply  a couple of times and then you cut it following the line you previously marked. Yes, you cut it. Don’t be afraid.

Once you have cut the  bottom part of the pocket, just place it on a sheet of paper and trace the shape of the pocket. 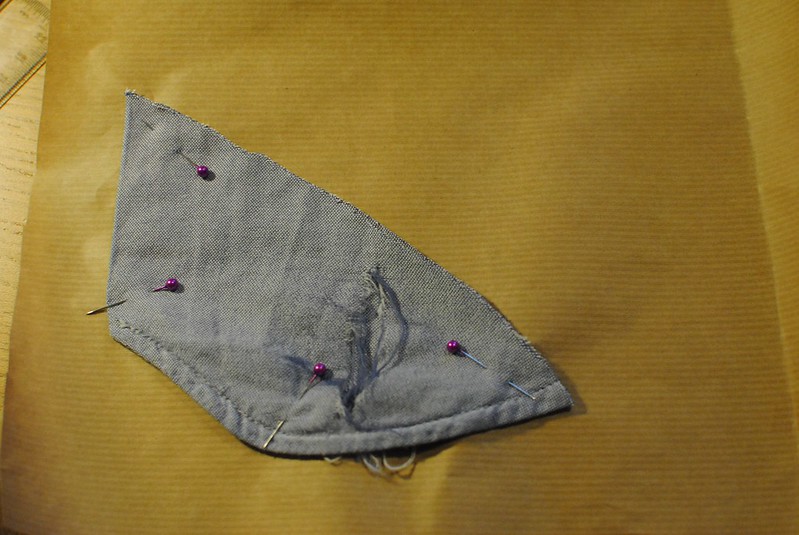 Add then two inches of seam allowance at the top (where you cut) and a quarter of an inch at the bottom (where the seam is). In my example I made a mistake and added half an inch here, but I fixed afterwards.

You see that the upper line is not straight anymore. It doesn’t really matter. What happened here is that, as this line is on the bias, it stretched out a bit, but it will make almost no difference at the end. 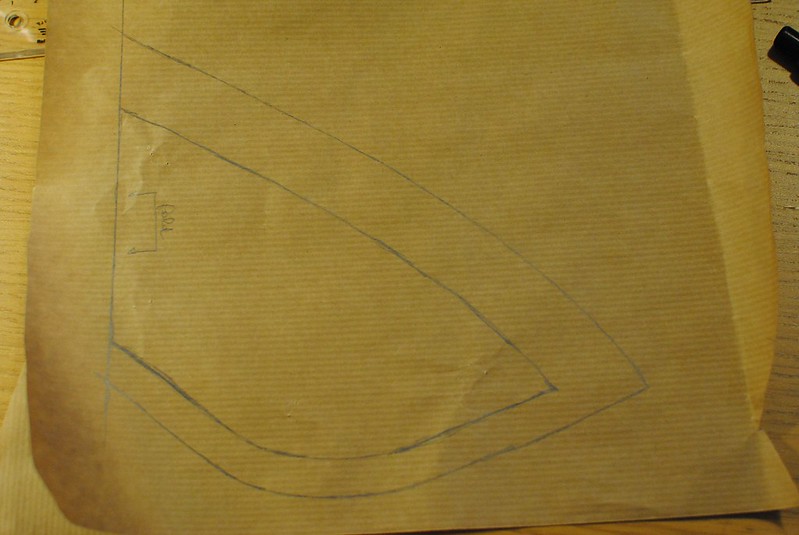 Note that this goes on the fold. Once you have it, you just have to cut it out and place it on you folded fabric making sure the fold is parallel to the grainline (have you prewashed this cotton fabric, right?). 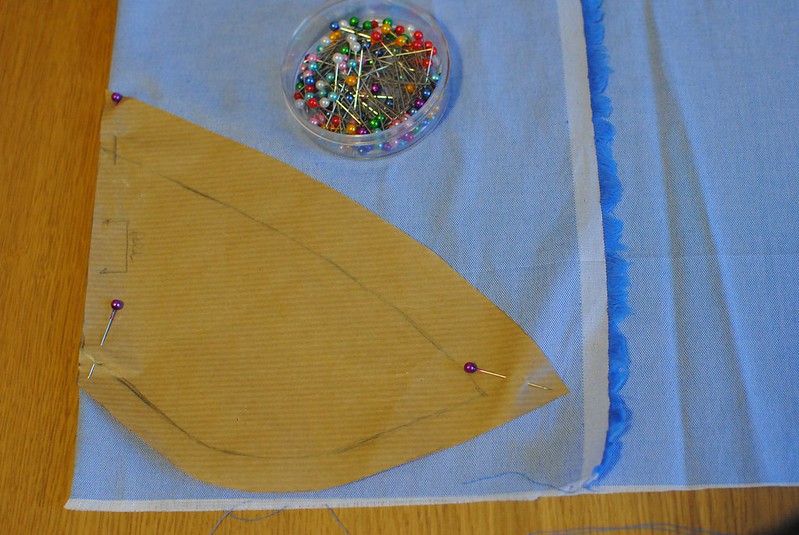 The bottom seam of a jeans pocket is very similar to a French seam. It’s overlocked with the right sides together and then sewn a quarter of an inch from this seam with the wrong sides together. I don’t have a serger so I just did a normal French seam, but you can experiment and see if you get better results with other technique. You pin the pocket and prepare it to sew. 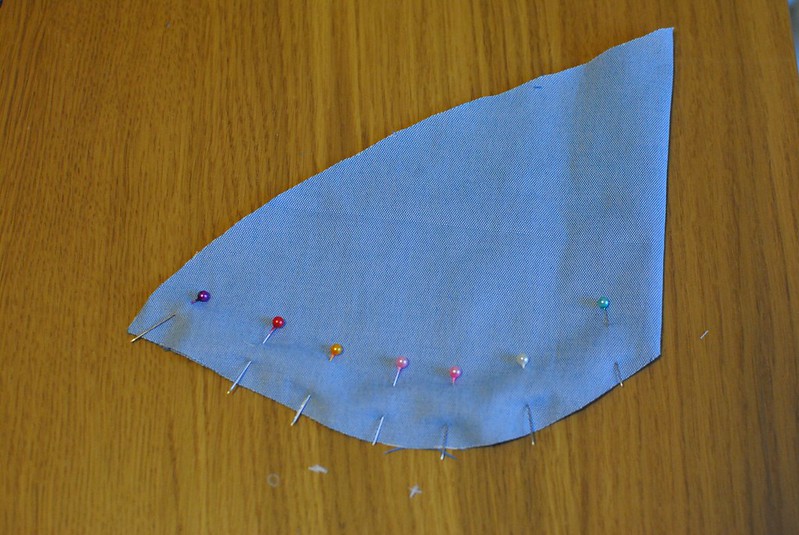 Sew it then a quarter of an inch from the edge using a straight stitch of less than 2 cm. Think that we want tight and durable stitches here so use a small stitch length. Check the thread color used for the original pocket. In my case it was a bluish faded white, so I decided to use white thread. It’s Sunday, I have white thread and anyway nobody is going to see the outer side of your pocket. 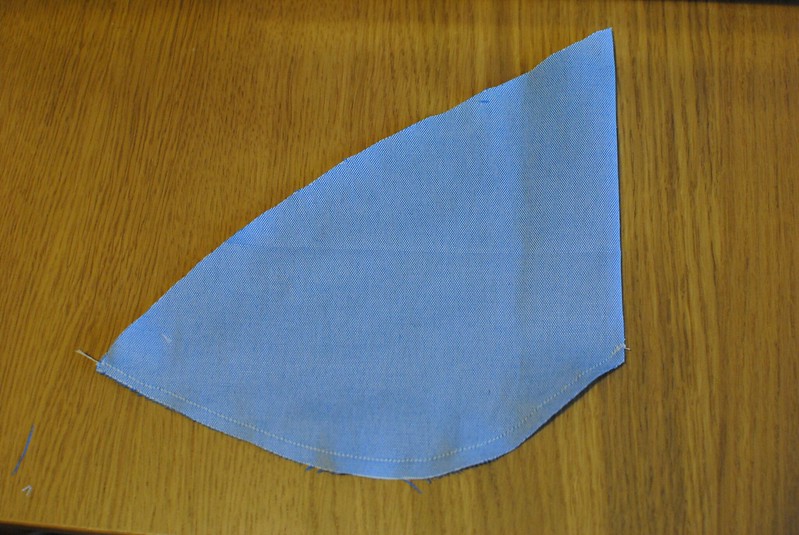 Turn the pocket inside out, press it and stitch it again a quarter of an inch from the edge. Don’t forget to backstitch. 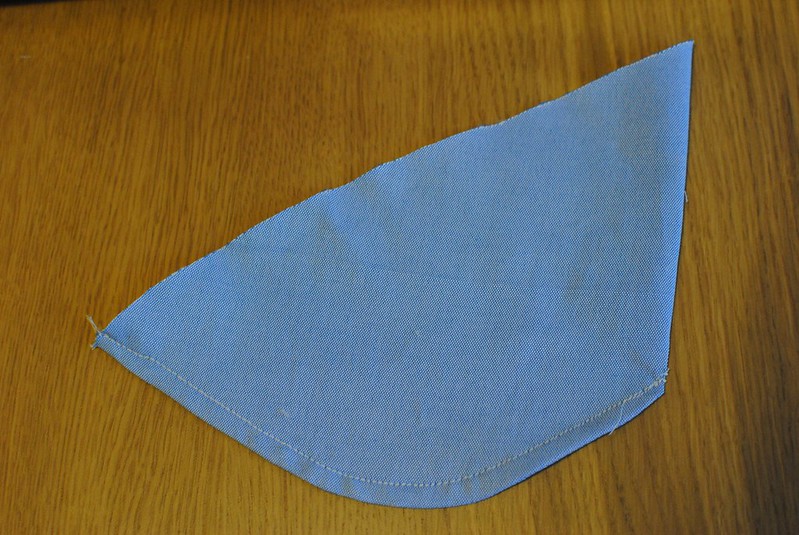 Leave one inch not sewn or you can just reap an inch at the end (the left end on the above picture). Only the second seam, leave the first intact. 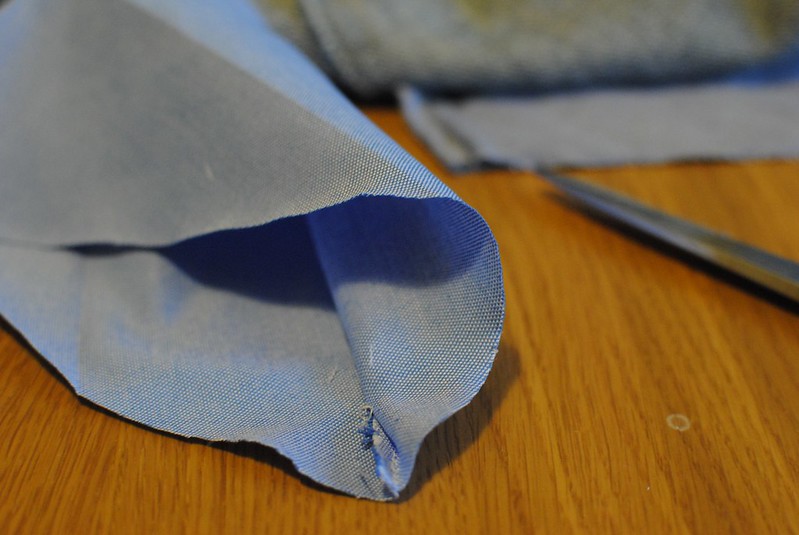 Then turn this inside out and place it inside what is left from the original pocket. Pin it in place. 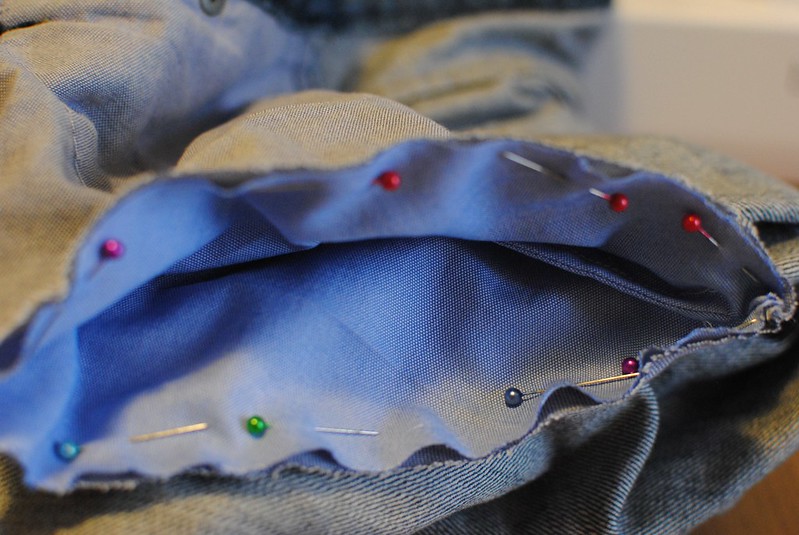 Stitch this with one inch seam allowance and pull this new part so that you have your pocket as it should be when you’re wearing your jeans. Re-stitch that last inch of the French seam going also over the original part of the pocket and finally apply a zig-zag stitch to both edges together. Here you can do the same as with the bottom edge and do a French seam instead or just a double seam. Remember that it needs to carry some weight and possible sharp objects. 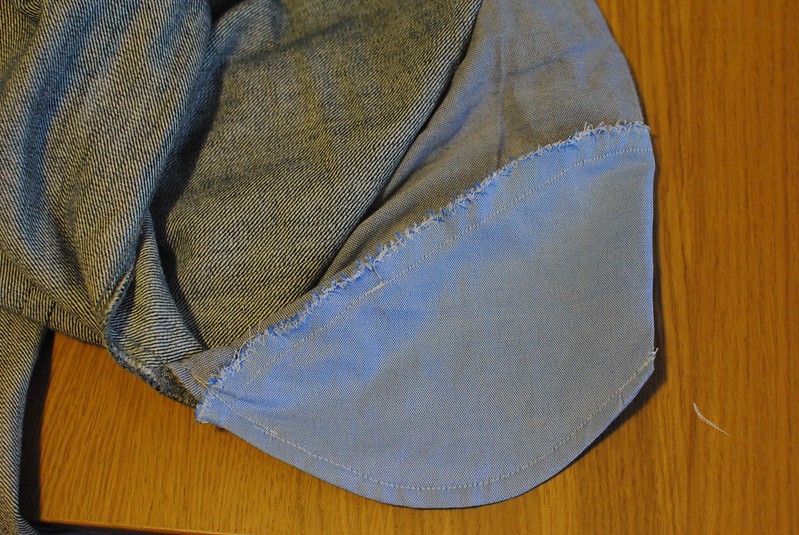 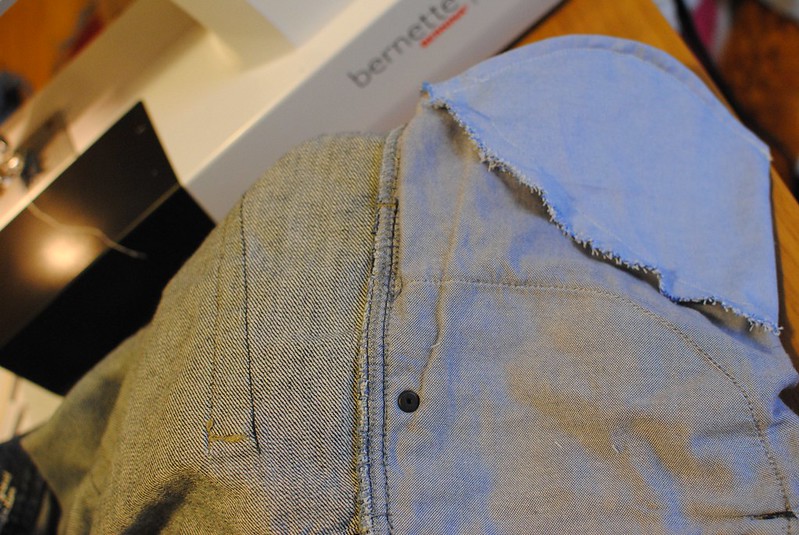 Pull from the other side and admire your new pocket. 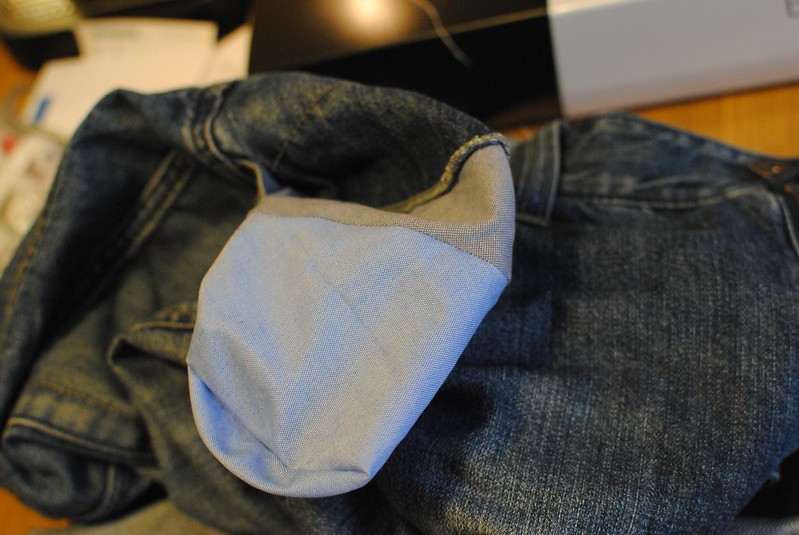 The color is not exactly the same but with some washes the difference will fade out. And again, who’s going to see the inside of your pockets?Well, only if you want to make clear that you ran out of money. 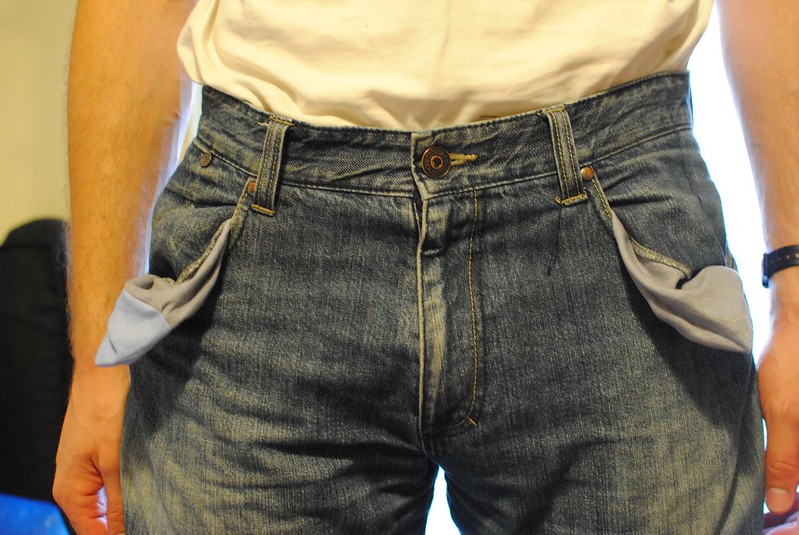 But you know, when you stuff your hands inside, they feel exactly the same! 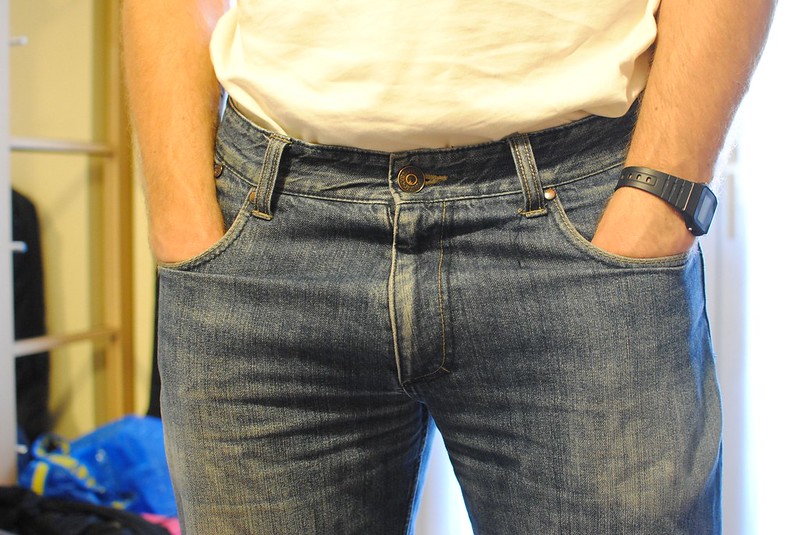 Go out then and enjoy your new pockets, stuff things inside and you’ll wear a permanent smile because no one’ll notice it!