As I’ve already explained, there’s a shop in Vigo called Retales Lidia where they sell fabric by the kilo. Some of those fabrics are the same as the ones used by Inditex, and among some useless fabrics, you can find some jewels. In the picture below, the white fabric is a cotton knit given to me by my sister, but it’s bought there. The one on the left is an oilcloth (around €6 per meter), and the two below are two cotton quilts (around €7 per meter). The rest are six kinds of fabric bought by the kilo. Some are 100% cotton and others are cotton blends (difficult to say since they were not labelled) but I just spend €13 for all of them. 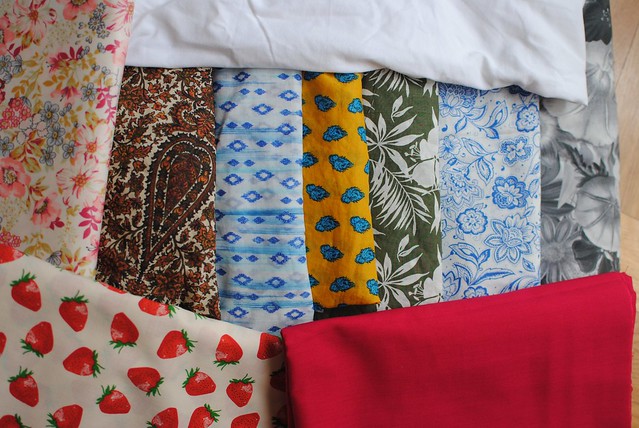 They are not ultra large, so they will be probably destined to skirts or blouses (I see an Alma blouse with the blue flowers fabric, second from the left; and a top with the white flowers on a green background fabric), except for the one at the most right. That one could be enough for a dress. I already have another fabric for a Cambie dress, but I keep thinking that with this one would be lovely too. Or just any other dress. I have to go pattern hunting now!

I also bought there some gorgeous linen for Koen’s Jeddediah pants. I’m impatient to start!

The two times I went to that shop, most of the fabrics by the kilo were different ones, which makes me think that they are selling a lot and also renewing at the same speed. What I won’t give for a shop like that in Madrid!