Any time I saw any of Heather’s blouses, I wanted to make one for myself. I think I wanted since I saw her first Edith blouse, but I didn’t sit down and sew it until last week. I think I procrastinated for so long because I was not 100% convinced about the rounded edges of the collar. Anyway, I had to make four Gertie’s 40s style blouses to finally sew this Edith blouse. I loved my 40s style blouses, but I also wanted to test this one to be able to compare them. The 40s style blouse is lovely but a tad too short to wear tucked inside skirts. Not that I’m a skirt wearer, but I want to have the option, just in case. 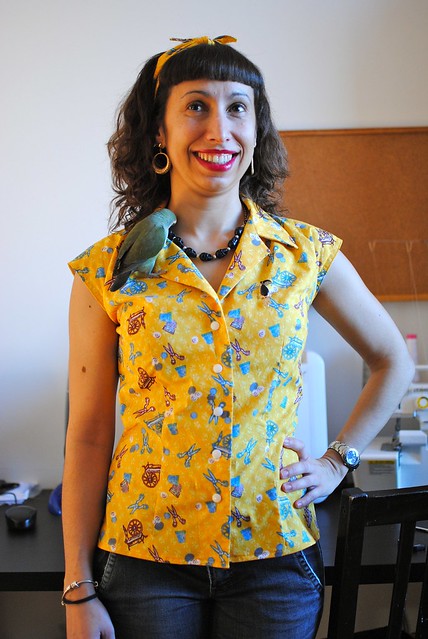 I have good and bad things to say about this pattern. First, the good stuff. This is a blouse and a dress pattern, and it comes in PDF. I hate tracing, so I often go for PDF patterns, which also saves some money. I quite liked that if you’re going to make the blouse, the instructions tell you which pages you have to print. I think it’s a nice detail that saves paper, ink and headaches.  Now, the bad stuff. I often use PDF patterns because I hate tracing, but if the pattern doesn’t come with seam allowances, then that advantage is completely gone. Why, oh, I wonder why some patterns don’t come with seam allowances. The only advantage I see is that you can add your preferred one, but c’mon, I don’t mind sewing with any given seam allowance, and I don’t understand why I need to do some extra work. Does anybody know why this happens?

Something I noticed is that the shoulder angles are not the same for all the sizes. I would expect them to be square angles, so that you get a straight line when sewing back and front. And if it’s not like this, I would at least expect some consistency and have all the same (it was a square angle for the larger sizes). I cut size 36 as it was but when hemming the sleeves I straightened this part, so I guess I would have gone for a square angle here. 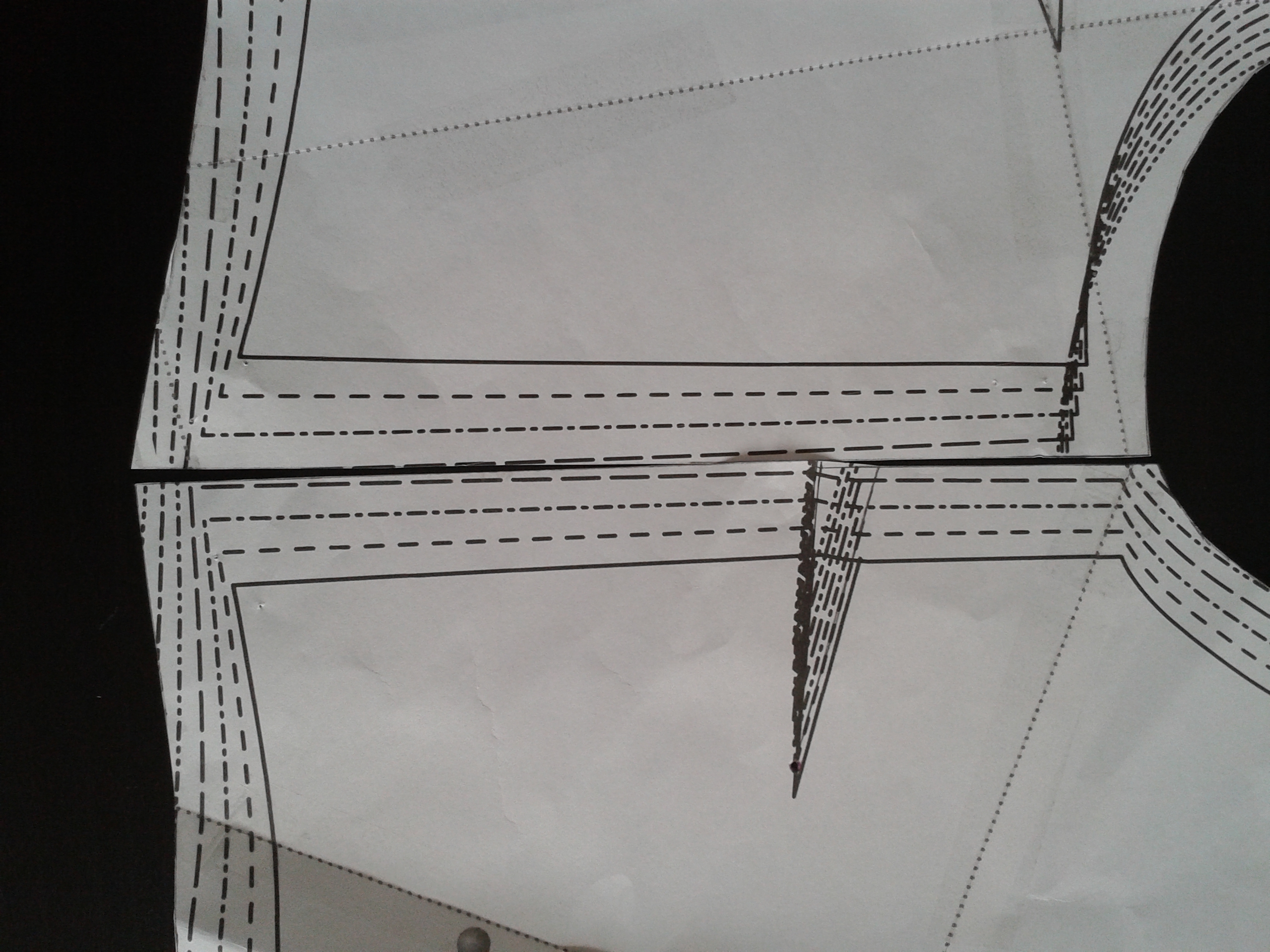 Now let’s talk about the collar. I didn’t like the original one, so I made real corners. I used the 40s style blouse as my model, but I think I’ve over done it here, since the final collar looks more 70s than 40s or 50s. Oh, well, I’ll do it better next time. I think it’s also because the collar of the Edith blouse is much larger than Gertie’s blouse. Jo said some time ago that all Gertie’s collars sit weird. I didn’t have issues with my blouses collars, but it’s true that they are not very visible, especially if you have long hair. This was another reason to test this Edith blouse, I wanted to see if the collar felt better than Gertie’s. Well, I can’t decide, since my collar modification was not completely successful. 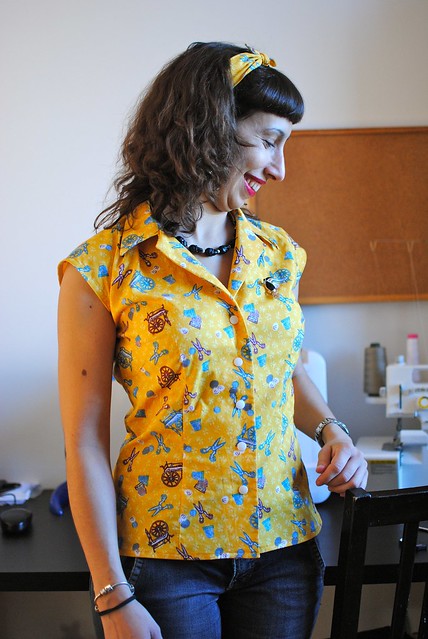 There’s also the color of the blouse. I think I bought this fabric to make a handbag, but then I let it sit for a while. I quite liked the print and the sewing and spinning motives. I don’t have many yellow tops, so I thought it would be a nice addition to my wardrobe, even if it was going to be a trial. But you know? I’ve discovered that I don’t look good in yellow. I took these pictures the same day I took my Chuck‘s pictures, exactly some minutes before. Somehow I think I look a lot better in the pictures where I’m wearing the Chuck sweater, and I think it’s partly due to the color. My skin is a bit olive green (especially in winter), and I think yellow doesn’t do me any favors. Curiously, Rochelle has also mulled about color this week. 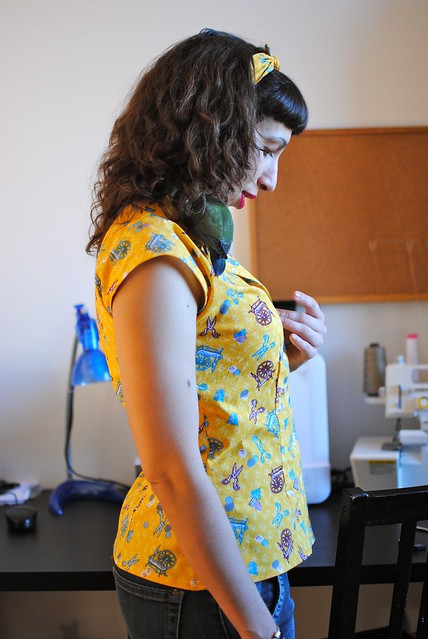 I was going to make a wearable muslin using this cotton quilt I bought some time ago (don’t remember where) but I didn’t want to throw a lot of work just to have a sack on me, so I tested the fit with a very fast muslin. The fit seemed right, so I proceeded to make my blouse. I cut it on Friday, and made the complete blouse on Saturday (that was fast!), just leaving hemming and snaps for Sunday morning. 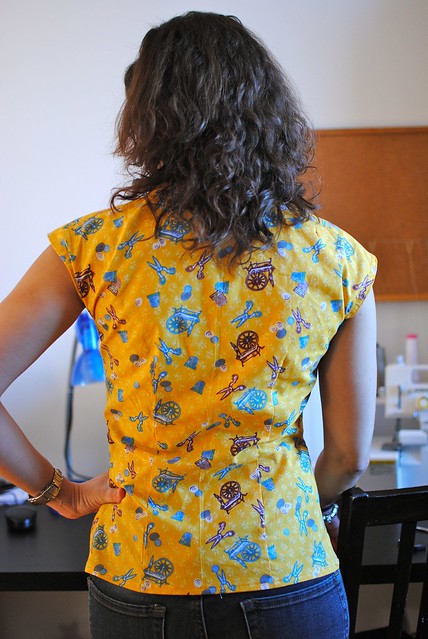 Something that felt a bit strange about the construction, is that it tells you to interface the under collar instead of the upper collar like other shirts/blouses I made (Archer, Gertie’s). I finally interfaced the upper collar, since doing the opposite wouldn’t have let me sleep at night. The under and upper collar are from the same pattern piece (unlike Gertie’s) but you’re instructed to trim the three outer sides of the under collar to make it sit right. There’s also a back facing that is not included in Gertie’s blouse. When I made Gertie’s blouse for the first time I was puzzled at this and didn’t get why it was like that. Now that I’ve made this blouse I know why. This facing adds some bulk to the upper back and even after sewing tacks to the shoulders, it doesn’t want to sit flat, and lifting it you will see the collar raw edges. Maybe if it was wider it would be better. I don’t know. I think if I make this blouse again, I’ll skip this facing and turn the collar seam allowances to the inside of the collar. I also want to mention that the side facings are a bit on the narrow side, and it seems they want to pop out when wearing the blouse. Another mod for next time. 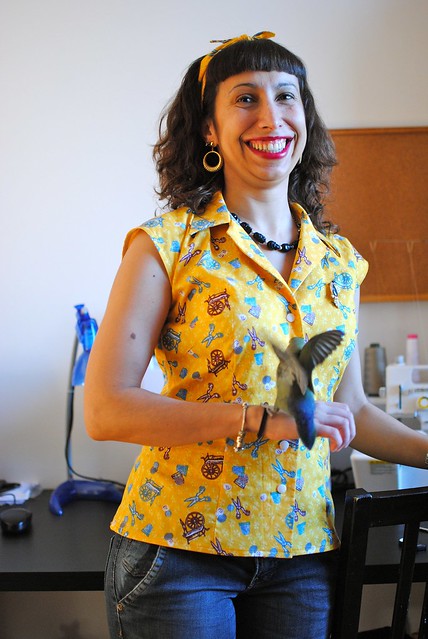 I love how kimono sleeves look, but I don’t enjoy making them. I remember the disaster on my Portrait blouse, and I didn’t want the same again, so I was careful and methodical this time. I marked some dots with air erasable pen 5/8″ from the edge (my seam allowance) and I made some cuts “almost” until there on the low part of the armscye, where it’s curved. I pressed then that seam allowance to the inside and then trimmed it to approx. 1/4″. I was afraid that it was going to be a mess and it would fray, so I applied some bias binding. As I was not completely sure about this fabric or the final blouse, I didn’t make any self bias binding, so I used premade. I wanted to apply it to that part of the sleeve hem that was turned in, but the curved and sliced part was tricky, so I used a short piece of wash away quilters tape. I used it for the beginning portion, but not for the straight part of the ending curve since it was not necessary. I don’ t know if you can see it on the picture, but there’s the bias, the quilters tape, and then the hem. The other part of the bias goes stitched on top.

Here it’s how it looks when stitching the bias binding.

And this is the end result. I’m not completely happy with the fact that you could see those seam allowances from outside, but sewing the side seam and then applying the bias binding would be even more fiddly, so I can live with it, and I think the result is quite neat. At least a lot better than what I expected before doing it. 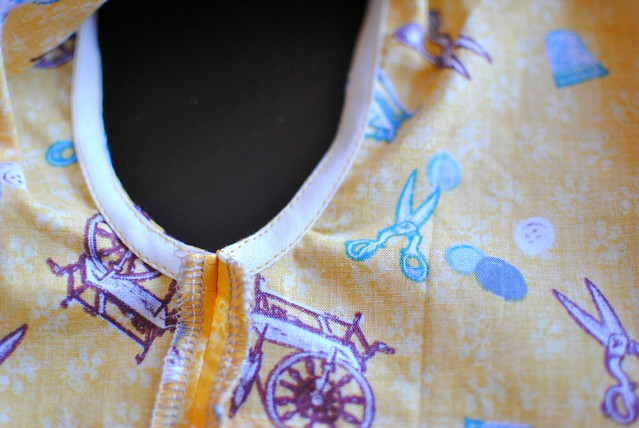 I’m sure you noticed the matching headband I’m wearing in the pictures. I wanted to make a headband for a very long time, but I always had more interesting projects in mind and was feeling lazy. I got a rotatory cutter and a mat for Christmas, so I had no excuse this time, and I completed the project in a blink. I loosely followed more or less the instructions here, but cut my stripes 76 cm by 7.5 cm (1/4″ of seam allowance). Then I removed 2 triangles from each side at the last 12 cm. No need to round it here since I slightly rounded when sewing them together.

After trying it, I think I should make it a bit longer and wider next time. I have mixed feelings about it, but I think it’s the damn color yellow again. Well, at least I’ve learned something. 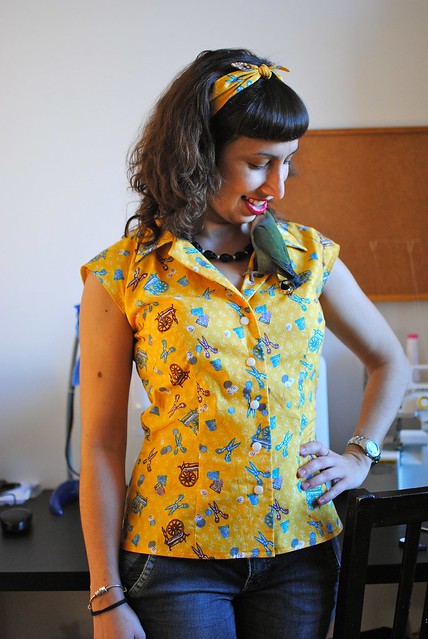 And I leave you here a picture of my last 40s style blouse to compare. I think I prefer the fit of the Edith blouse, and I could try it with Gertie’s sleeves. And fixing the collar, off course. What do you think? 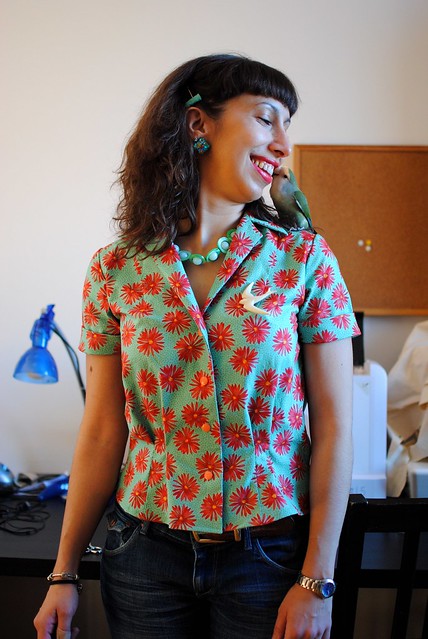