Last Saturday was the birthday of my friend Annalisa. We met unexpectedly in an activity that was not in my plans. Yes, we met in Capoeira class. I don’t know if I’ve mentioned it here, but I started practicing Capoeira because I was in the need of some aerobic activity. I went to the gym 5 minutes from my place and tried, or better said, suffered a first and last spinning class (the one with the bike, ha) and Koen convinced me to try Capoeira, that was also available at the same gym. And I got hooked. I met Annalisa there. She missed a lot of classes but together we convinced each other to take things more seriously. I just wanted to move a bit, do some exercise, and found a friend and a great sport. We instantly connected. It doesn’t happen often, it could have been that we both are thirty-something and in the same wavelength. 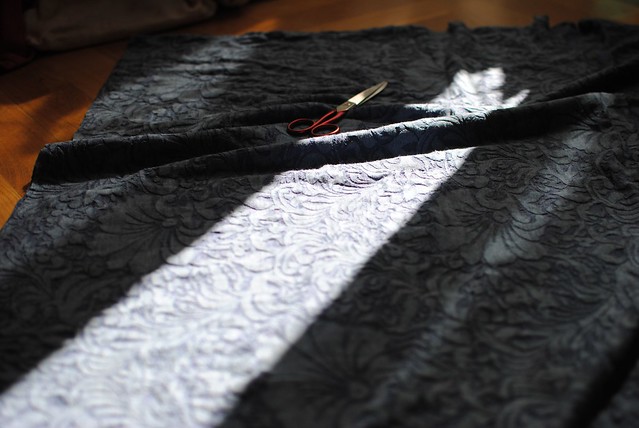 She is from Italy and spent the weekend there with her family. There was class today but she not going because she’s just arrived from Italy and I’m not going because I’ve been feeling not very well lately. I’ll give it to her at the next class. I have an appointment with my allergist tomorrow morning, so I stopped taking my antihistaminics last week just in case we are doing some tests again. Just the day after stopping  taking the pills I started to feel a bit ill, but I don’t know whether it’s either a cold or just allergy. It’s kind of weird, since among all the allergies I have (no few) ragweed was not one of them. But what else could be at this time of the year in a dry place? It’s not only that I’m sneezing all the time and I have a running nose, but I’m having itches all over my body, and in one of the pictures below you can see a couple of wheals on my face. I’m having them over and over and sometimes my lower lip gets a bit swollen on the left side. Last night I woke up at 4 am with a horrible itch just were the ankle joins the foot. I had to get up to put some cream to calm it down. 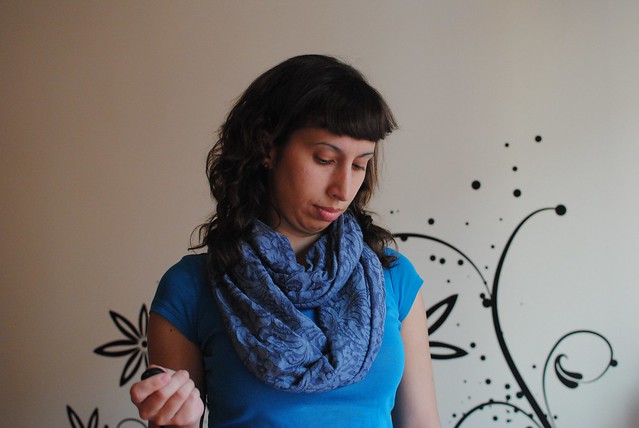 I have made this infinity scarf for Annalisa for her birthday. I more or less followed this recipe but my rectangle measurements were 150 x 56 cm (30 cm shorter than the original). Since this cotton blend is a knit I used a narrow zig-zag stitch. At first I was going to use cotton voile, since it’s what most infinity scarf recipes recommend, but I found this wonderful lacy knit I couldn’t let it pass. And I confess it, I love blue. 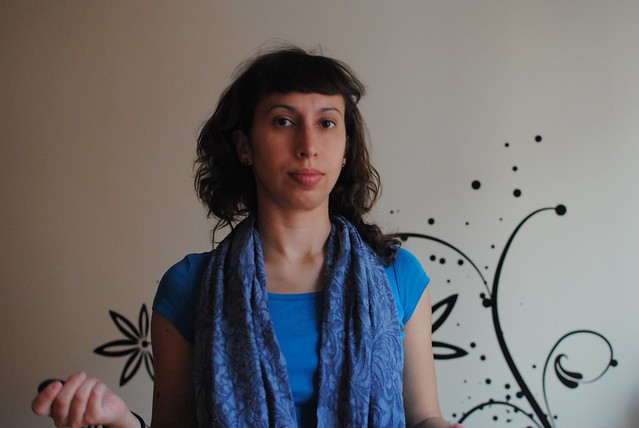 As you can see, I’ve recently bought a remote for my camera. This is from Amazon and it was cheaper than the official for Nikon. It’s simple but it does exactly what it’s expected. A nice buy!

The elasticity of the knit fabric makes the scarf very comfortable and versatile, something I hadn’t thought of before, when I was thinking of using cotton voile. It’s also very soft and breathable, and since it’s elastic you can even easily fold it in three for extra coziness. 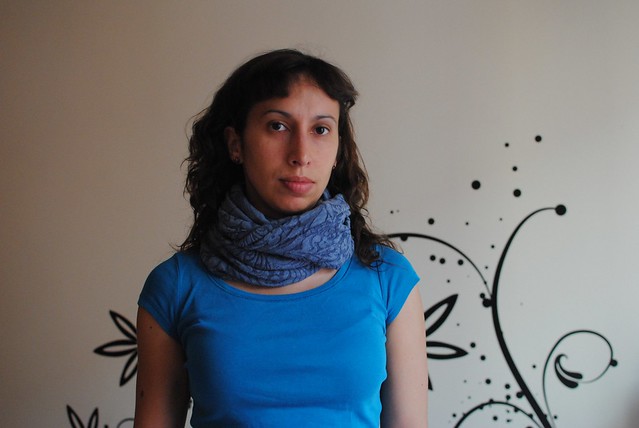 Even if I’m not showing a happy and convinced face here I definitely love it. Just mind me, I have itches everywhere, a running nose and a light headache.