You probably know Thread Theory as a independent company designing sewing patterns for men. Well, to celebrate their second anniversary they have released a pattern for us, women: The Camas Blouse. On the original picture it appears as a loose top, so to make it more my style, I’ve made it two sizes smaller than what was intended. According to my measurements I should have done a size 4, but I made a size 0 instead. Luckily the finished garment measurements are included so it’s easy to decide about what size you want to make. It also lists biceps, length, and other measurements, apart from the usual bust, waist and hips. As you know, I tend to dislike loose tops on my body. I have wide hips, so with loose tops I look simply fat and round. Going down two sizes made this top perfect. 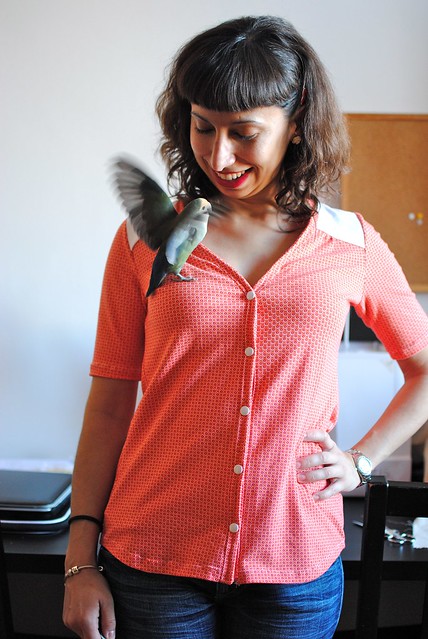 I had this white knit donated by my sister years ago, but it was too small to make anything but maybe underwear, so it was perfect to pair with this orange floral that I bought during my visit to my home town this Christmas (fabric by the kilo). I was not sure about the whole, and I thought it thoroughly, even considering other fabrics, but these two paired reminded me a bit of a vintage baseball t-shirt and I liked it. 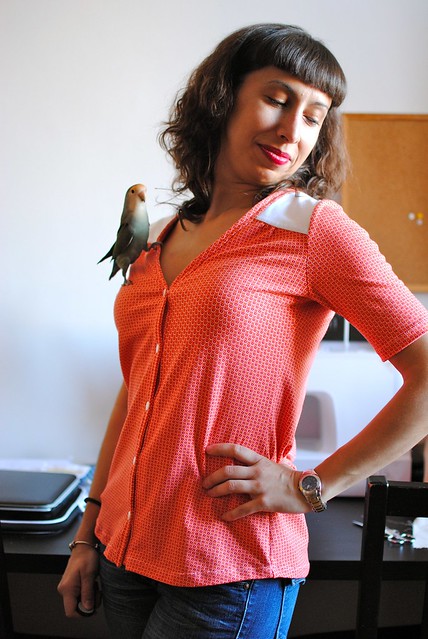 The original pattern comes with three quarter sleeves, which I find flattering, but it’s a length that I never ever wear. If I’m cold I wear long sleeves and a t-shirt with more chest coverage, and if I’m warm I wear short sleeves. Both long and short are good for layering with sweaters but three quarter sleeves are the worst invention ever. When it’s warm they are annoying, and when it’s cold your wrists freeze and layering it with a sweater is a total nightmare (how do you do in these cases, so that the three quarter sleeves stay in place when putting a sweater on?). 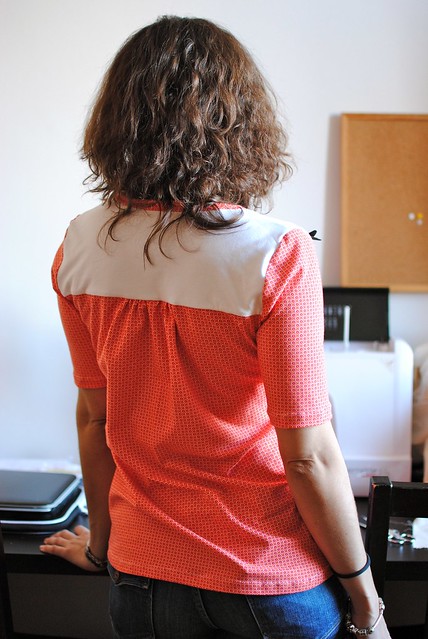 The instructions explain how to construct the yoke to have all seams concealed but, after making a couple of Archer Shirts, I prefer the burrito technique for this. You cover three steps in one and in my opinion the result is neater. The pattern has gathers on front and back. I quite liked the front ones but I was not sure about the back gathers the first time I tried it on. I escape as much as I can from loose tops and I was afraid these gathers would make it too loose. Now that I see the pictures, I think it looks kind of cute. 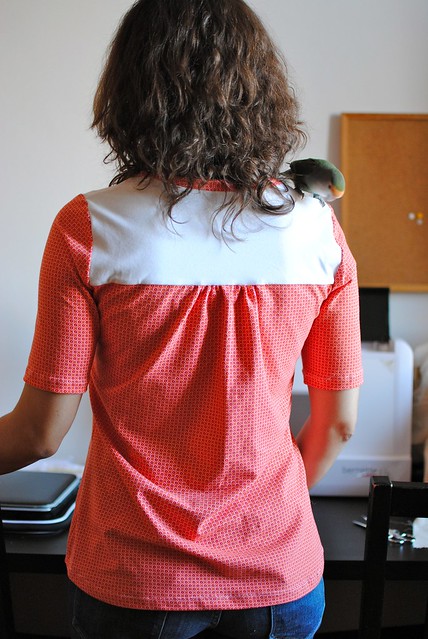 I constructed almost everything on my serger, machine basting some of the most fiddly parts, like setting in the sleeves. I should have machine basted the button band before attaching it to the top, since my serger made it shift a bit, but knit fabrics are forgiving and it’s not noticeable. 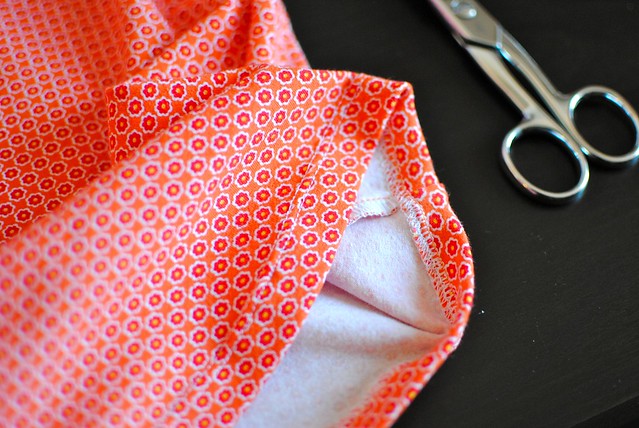 Where I had real problems was topstitching the button band. My sewing machine decided to stop cooperating and I had to clean it and oil it. It improved a bit but there was a part it decided it was not got to sew. 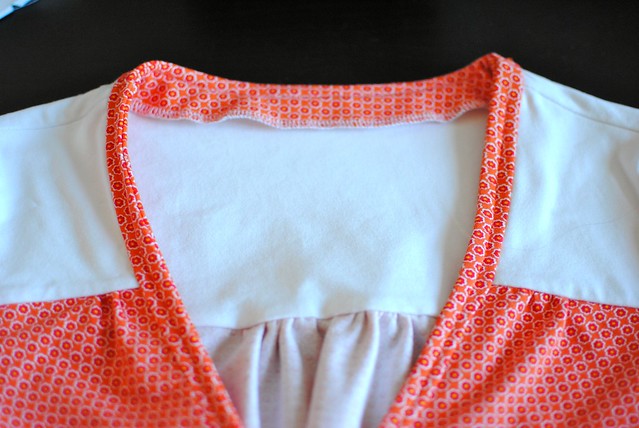 It’s hemmed using a twin needle on my sewing machine and all edges are serged, even the ones enclosed inside the yoke. I loved serged edges, how could I live without a serger for so long?

The first time I tried this on I thought it showed too much cleavage, but it’s probably because during Winter I’m stuffed in clothes and I’m not used to showing a lot of skin. In fact I can say that it looks quite ok on these pictures. 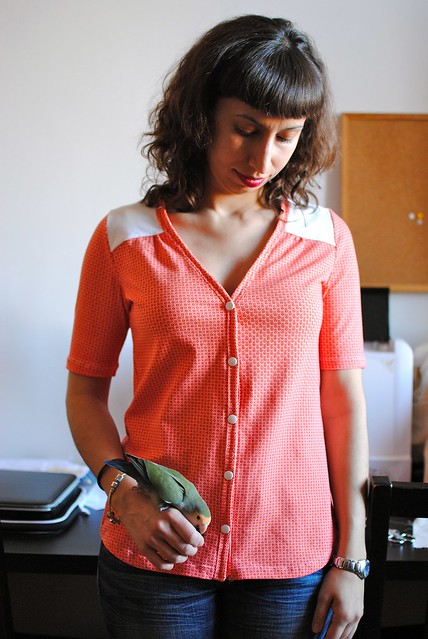 I also had a bit of a nightmare attaching the snaps. Snaps are an easy alternative to buttons, but they give problems when they have to go through several layers of fabric. A couple of them fell in the process but I finally got to convince them to stay put. 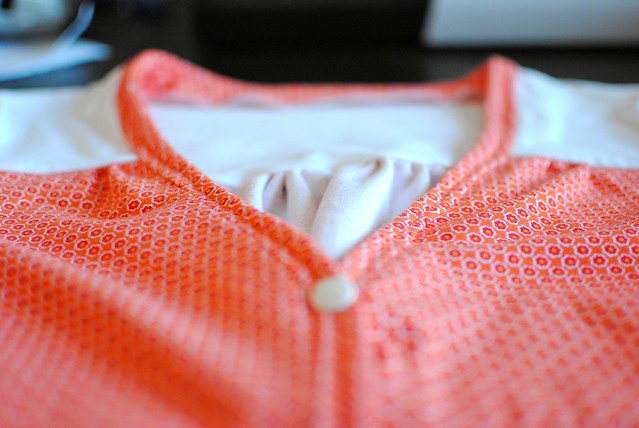 Something that I noticed on the original pattern was the button placement on the button band. I don’t know if it was intentional but the buttons were not equally spaced. I measured my button band and I spaced mine equally. I think it looks better this way. 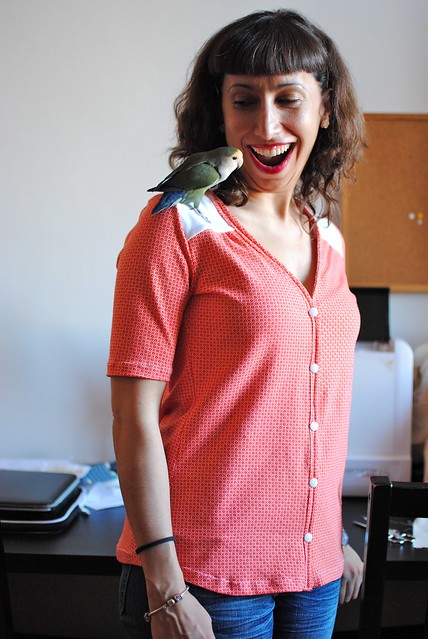 What do you think about this Thread Theory pattern for women? I think we may be onto something new. Let’s see what they have in store for us.