It’s definitely clear that my summers are doomed. Last year I lost 8 kilos and was quite unhealthy, and this one I lost my beloved Gerry. I see now that my last post is from exactly two months ago, but I haven’t sewn or knitted for even longer. It’s been almost three months since Gerry left. Sometimes if feels easier, but then a sudden sadness strikes me and I cry until I have no more tears to cry. I guess the worst is not knowing what happened to him or if he is okay. Just after he left I had to buy a new mobile because its battery died, so it helped me to avoid looking at old pictures. Sometimes I just ignore the facts, think that I’m healed and then I stumble and fall again. Well, I guess nobody is perfect.

Some things have happened lately. As a silent house was like hell for me, we adopted two baby lovebirds, which we fed with a syringe several times a day. Between the insomnia due to missing Gerry and the birds feeding, we almost became zombies.

We tried to recover and went to the Screamin’ Festival we had planned to go months in advance. The plan was that Gerry was going to stay with the breeder who gave him to us, but things were different now. We had to babies to feed, so we took them with us, and even had to feed them in the car since it was a seven hour ride. 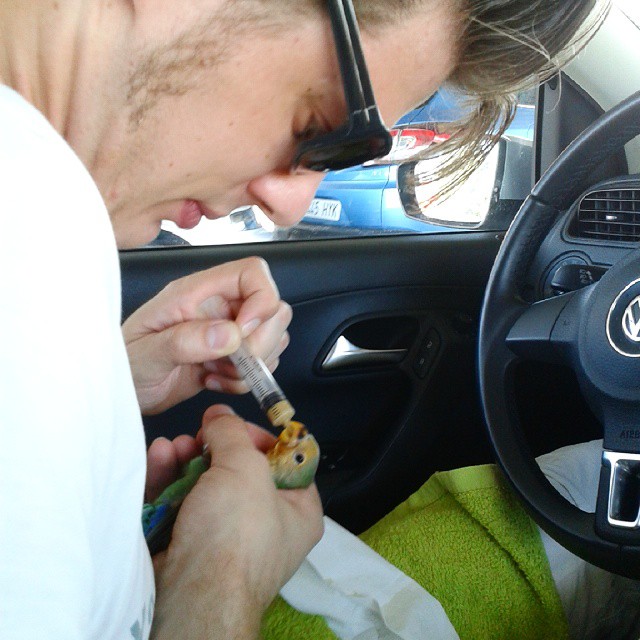 And we tried to have fun and wear some me-made clothes.

Then a month and a half after Gerry was gone I got a call saying that a bird like him had gotten inside a girl’s house through one of the windows. I had false hopes already four or five times before that, but that didn’t make it hurt less. She couldn’t keep him, so we decided to adopt him and look for his family. We never found them, so Colin stayed here. He looks so much like my Gerry that I spent hours looking at him and asking him “who are you?”.

It was love at first sight for both of us, and he follows me everywhere in the house.

After the quarantine passed I could introduce the birds, but it seems Colin is afraid of the other two. I guess he was an only child and never learned to interact with other birds. My initial plan was to look for a mate for him but I don’t think it will work.

We had vacation and visited my family on the coast.

And we off course took the birds, which my niece Paula quite enjoyed.

And I finally got to wear my Soma Swimsuit, sewn last year and never blogged.

And when we came back home I started sewing again. I had promised a pair of Jedediah shorts to Koen two years ago, but as my summers are doomed, I didn’t fulfill my promise until now. They are not finished yet, so I can still fail. And if sewing with one lovebird was difficult, with three it’s almost impossible. I have two stealing pins and pooping on my fabric, while the third is biting my neck demanding attention. Oh, well, I love them anyway.

It seems Colin adapted quite well to his new home, I just hope we can make him happy, and that Gerry is somewhere out there happy too.