I finished this blouse this morning after driving Koen to the airport. He’s going to a conference in Paris with some of his colleagues. It was very rewarding to see him yesterday evening packing his Jedediah pants and his Émilien cardigan among all the rest of his clothes. I’ll be home alone until Friday and it feels strange. Before being together I lived alone for almost two years and it felt great.; I really enjoyed independence, having my time and space for myself. We started dating in March and in September it was time to renew my apartment contract. He moved in and we’ve been together since then. That March was five and a half years ago. Our first year we lived in 30 square meters and survived. We complement each other very well and I got so used to him that I never regretted leaving behind my life alone. It’s going to feel very strange to be home alone these days.

Sooo, to fight the lonely blues I spent the rest of the morning sewing and giving the last kick to this blouse because it was taking too long (c’mon, a week for a blouse is just too much). After the nice pictures Koen took of me just on our street I had to do it again by myself (timer, tripod and running) so forgive me because I look bad in these pictures. 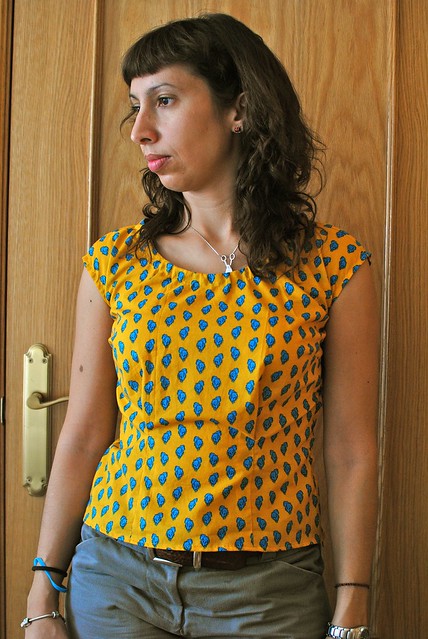 The pattern is from Gertie’s New Book For Better Sewing. I bought that book in mid July and I studied it from beginning to end during our trip to Belgium on the first week of August. I have to say that I loved the book. It’s true what other people pointed out that some of the garment look weird on the pictures, but that doesn’t discourage me to try to make them myself. This is just my first garment from the book, so I cannot say a lot about the others, but at least this blouse fit me with almost no modifications. Gertie based the sizing on her own body and she likes her clothes fitted, so be prepared for that. Something that bothers me a bit was that she didn’t include the garment finished measurements, but as she explains, that can be deduced by the pattern pieces, so at the end it was fine. I cut a size 4 for my bust and a size 6 for my waist and the fit was spot on. This blouse has tucks instead of vertical darts and that is the only thing that I had to adjust, since the blouse looked a little bit baggy on me. Probably I could have done a FBA but I found that slightly modifying the tucks worked for me. For the front I prolonged them 3.5 cm upwards and for the back I eliminated the bottom 6 cm but added 8 to the top (does it make sense?). 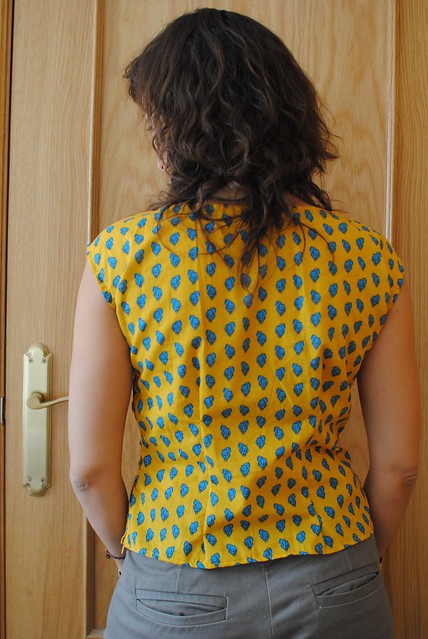 The construction was fairly simple so I decided to complicate it a little bit more by adding French Seams that make the blouse look a lot more neat on the inside. 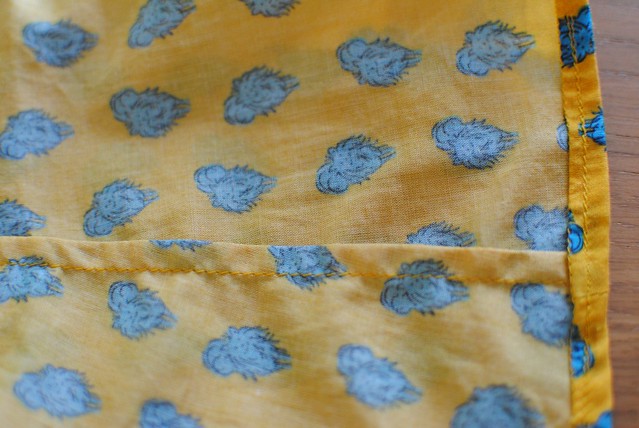 It was my first time doing it and I will definitely do it again. They provide a nice finishing when dealing with thin fabrics. Talking about fabrics, this one was one of those that I bought in Vigo by the kilo. It was a 1.5 m piece and it probably cost between 2 and 2.5 euros. It’s not 100% cotton but I would say there’s cotton or rayon in it (the burn test was not conclusive). It’s quite light and feels breathable. I’m wondering about the origin of it, since one of the piece ends shows a different print. Maybe the end of a piece? 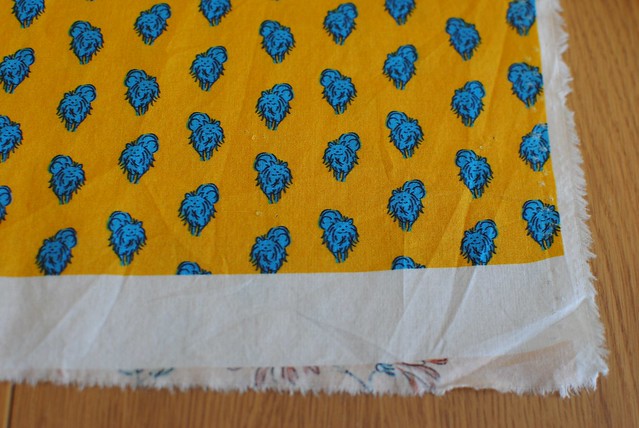 Another new technique that I tried here was inserting a lapped zipper. I read about it in the book but I’m a visual learner and this Craftsy course gave me the final clue. It doesn’t look perfect but just because I omitted the interfacing and that’s absolutely my fault. Now I know for next time what I shouldn’t do. 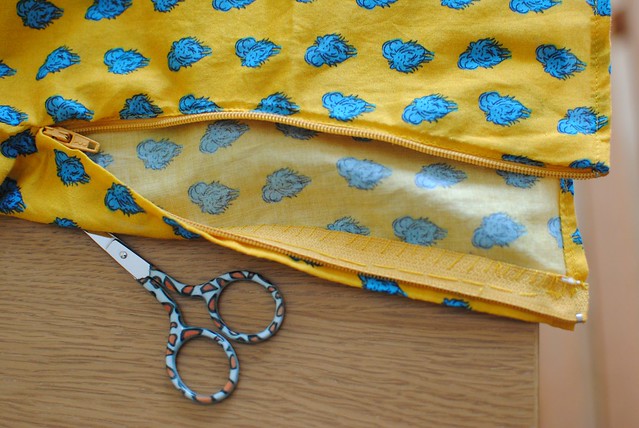 Anyway, when it’s closed it’s barely noticeable so I’m fine with that. If all my problems were those… 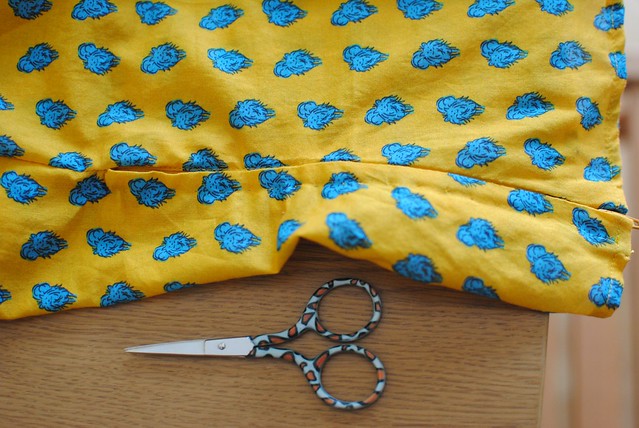 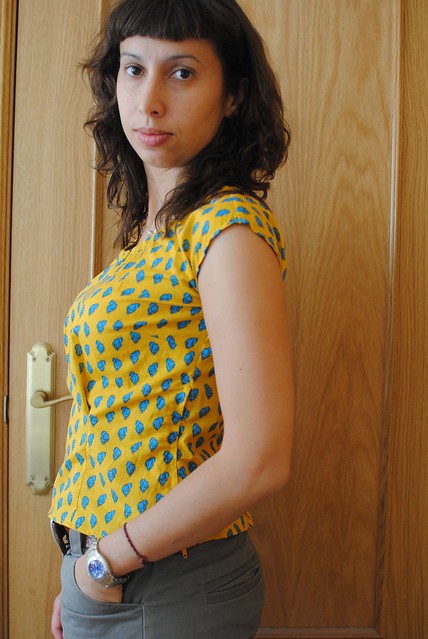 What gave me hell were the armholes. You are supposed to make kind of faux rolled seam and mine look like India (my mum’s dog) just came to pay me a visit and chew on them (and the neckline for that matter). Oh, I miss her so much.

I found very difficult to sew them like that since the lower part of the armhole in the pattern doesn’t form a 90º angle (it’s larger than that), so when you sew front and back you don’t have a beautiful and continuos curve but an ugly angle (has anybody had this too?). Well, it could be because I don’t have much experience, but sewing that was one of the things why this project took me so long. If I make this next time, I’m going to change that in the pattern so those angles feel right to me. Also, after wearing it for a while, I wish I had more room in there so I’m definitely re-drafting these next time. 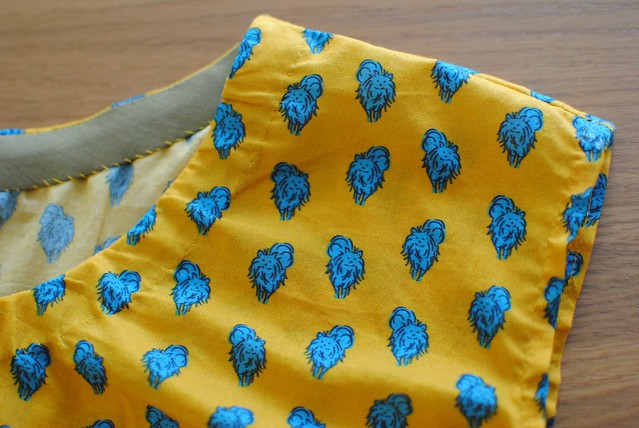 I was going to add facings to the neckline but this fabric is so thin that I could see the white interfacing through it and then there was the matter of finishing the edge, so I opted for bias tape. It doesn’t look super neat but it’s just fine for me. OMG, I hate hand sewing and I think you can see that here. 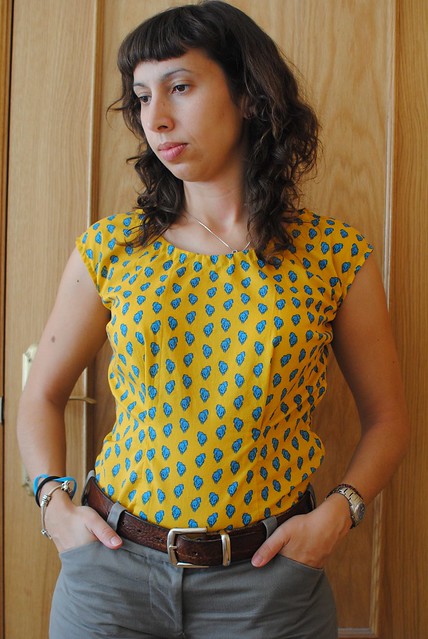 This blouse also looks nice tucked inside your pants (can you see my Thurlows here?) or your skirt, but bear in mind that it’s a tad short so you may want to lengthen it a bit.

Overall I’m quite happy with this blouse and especially with the new techniques I learned. And don’t you love those blue puppies? 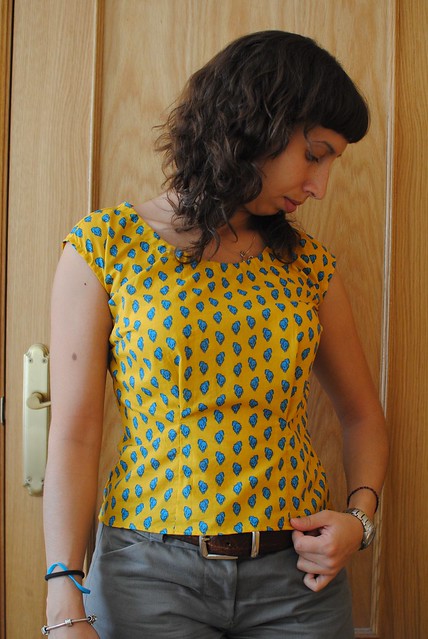 Blue puppies are the best! Can you see that I’m a dog person?