I apologize for the delay in writing and publishing this post. I thought the most boring part would be adding the pictures, but it wasn’t like that. In fact, I added them ten days ago, but my allergies and health issues are distracting me too often from the things that make me happy. I shouldn’t let that happen again, and I’m glad to inform that, even though my allergies haven’t got any better, the situation is more under control.

Here the pictures from Me May Made 2014: 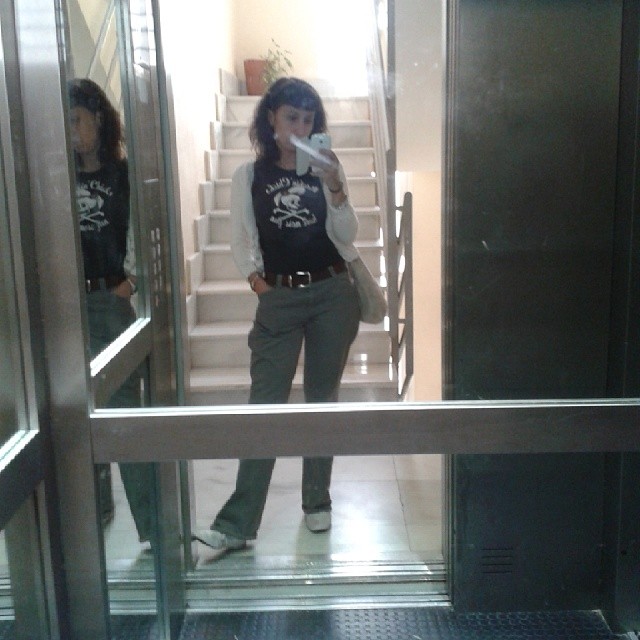 As you can see there are a lot of repeats. I haven’t been sewing for so long and last year I regretted so much not being able to participate, so this year I decided to join even with my small handmade wardrobe. I’m very happy that I decided to do so, because it helped me to recognize gaps, successes and fails.

Let’s take a look at some numbers:

The total winners this month were the Miette Cardigan, Thurlow Trousers and the Lady Skater Dress. That cardigan is so versatile, comfortable and ideal for these temperatures that I should knit at least two more. The fact of being white helps a lot to combine with almost any dress or skirt in my wardrobe. When knitting it I disliked the portion of cotton in the fibers, but now that I wear it, I realize that it’s ideal for this weather, for summer when airco conditions and part of autumn. I should knit another one in another basic color and another one in a vivid color that goes with my wardrobe. I should also give a try to another of Andi‘s cardigans knitted with similar yarn.

The Thurlow trousers combined got 13 days of wear, same as the Miette Cardigan. That’s a lot of wear. I confess that during colder months I wore them even more, easily almost everyday I had a Thurlow on my legs. Now getting warmer and me thinner, it’s happening less and less. This week I rescued my old jeans that were too tight two years ago. I like them but that enormous waist annoys me. I would like to make more Thurlows and a pair of jeans but I don’t know how my weight is going to evolve. I’ve lost 6 kg in 2 months due to my allergies (you know the feeling of crying due to starving?) but as I’ve said, the situation is now under control. I’ve discovered yuca starch and I’m making some experiments and I have already my energy back. Now I need the weight too.

And what to say about the Lady Skater? It’s comfy, flattering and the perfect summer dress. I’m already cutting a second one (where I raised the waist 3 cm) and planning a third one. I should make one in a plain fabric one day. Also the fact of being elastic, makes it wearable despite the fact that my weight is still changing. I expected to make Anna, Bleuet and Bombshell dresses this month, but that’s not going to happen. At least until I stabilize my weight and my life (eating and sport-wise).

The Freija and Owls sweaters got a lot less wear than previous months due to the weather getting warmer, but trust me, winter was spent inside those two sweaters. I’m knitting a second Owls Sweater and I should knit something like that Freija again. Not the same pattern but something similar. I’m at the moment knitting Armande in purple. It’s going to be awesome.

The Cambie Dress was worn only 4 times, but in my defense I should say that it was finished at the beginning of May. Gosh, I love that dress. It’s very comfortable and elegant, and if I didn’t wear it more often was because I think it’s too chick just to go to the bakery (I work from home most of the time). I liked it so much that I decided to make a skirt from the same pattern. The skirt got worn just 2 times, but that’s because I finished it almost at the end of the month. Also, the dress was made during my most heavy weight loss, so it’s a bit loose now, but still wearable.

The Ziggi biker jacket was just worn at the end of the month when we had a cold spell, but I swear that I wore it almost everyday the previous month. That jacket and how I planned was a total success. I’m so happy that I decided to install a quilted lining.

The same goes for the Fleece Renfrew. I wore it a lot in April, but May was a bit warmer so no change to wear it too much.

There were things that got worn just once and finally I know why. The cowl neck dress was a lovely idea, but my knowledge was poor then. The fabric is too thin and the skirt just gets in between my legs when walking. Probably a slip would help here. Also the hem and armscyes look a bit sloppy, again because the fabric is so thin. It was a good idea, but the fabric and execution were wrong. The orange skirt just feels too large now. It’s designed to be worn lower than the natural waist and that doesn’t help now that I’ve lost weight. Also the waist line looks a bit weird. Well, there was undoubtedly some evolution in my sewing. The A-line skirt with patch pockets had a lot of wear last year but not now. Why? Not sure. I think the fact that tends to turn when walking and rubbing against my handbag annoys me a bit. I hate to have to pay too much attention to those things when I’m walking. That also happens to the light blue A-line skirt. I think it’s in part because they sit lower than the original waist and I’ve lost weight. Anyway, that’s why I prefer dresses now (even though the Cambie skirt is a complete success). Another reason is that right now I prefer just under the knee length.

The portrait blouse got worn 4 times, but previous months I wore it more just because I wore less dresses. I like that blouse, but there’s something wrong with it. It wrinkles a bit on the underarms and my execution was not the best. Anyway, I think I need more blouses for the times that I wear trousers and for that Cambie skirt. I’ve recently finished an Alma blouse (still unblogged) and I’m planning a Belcarra blouse, a Black Canvas Tee, a Maria Denmark Edith-Tiki Blouse, and an Archer Tiki Blouse; and I think that’s the right direction.

I really wanted to wear my Lonsdale Dress, but May was not as warm as expected. The problem with the Lonsdale is the bow or knot on the back, and that’s a bit annoying to wear a cardigan over it. I’ll probably modify that if I ever make it again.

I’ve also discovered that I feel more happy when wearing things that I spent quite some time making, and not rushing through the process. I didn’t wear my Hawthorn and i think it’s because I got carried away by the sewalong but I didn’t feel it was my style. The Thurlows, the Lady Skater, the blouse, the Cambie; those were made just when I felt the need of making them. Not rushing to make a deadline. Also, my last Alma blouse is a complete beauty and it took me some days. This is just to say that it’s great to be part of the community and joining sewalongs, but sometimes we need to avoid distractions and make what our heart feels and at our own pace. I’m more of a perfectionist right now. For me, especially in these difficult moments, it’s what makes sense and makes me happy.