Before having the serger I’d never sewn any gifts, except for my first Reversible Zippy Hoodie or a handbag (with enclosed seam allowances), since my seam allowances looked sloppy and totally unprofessional. But being able to serge my seam allowances gives to the finished garment a much neater look, and it doesn’t feel like it’s going to unravel in the washing machine (I used to zigzag those edges but I never liked the look of it). 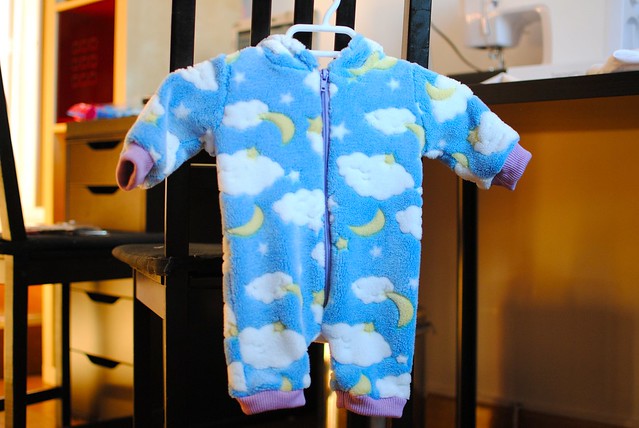 One of my friends from school had her second baby some days ago, and I wanted to give her something. I didn’t have a lot of time to knit lately, and knitted presents are something that you have to plan in advance, so I decided to sew something for her boy. I’ve never sewn any baby clothes before, and some days ago I spotted these baby overalls on the Sew Mama Sew blog. 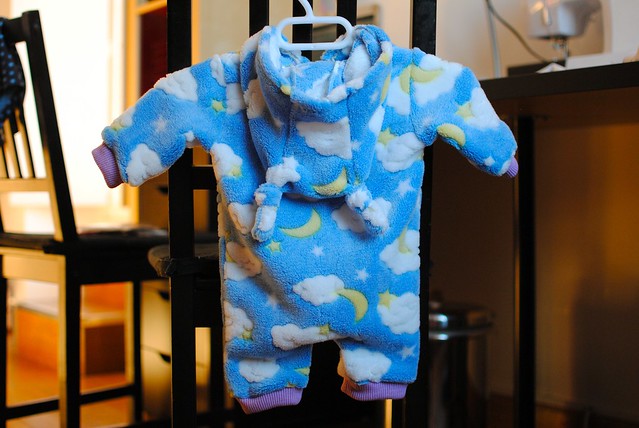 It’s a PDF pattern, and as it is very small, it has very few pages, so it’s not complicated to put together. The sizing comes in cm, and for somebody that knows nothing about babies it could be a bit confusing. I’m used to baby sizes such as newborn, 6m, 1Y, and the like, but having to know the baby’s height came a bit of a surprise. How tall should a baby be in cm? Honestly, no idea, so I had to ask my friend like if it was the most casual of questions, since this gift will be a surprise. Hugo was born on the 23rd and he measured 47 cm. The smallest size was for 50 cm, but as babies grow very fast during the first days and months, and as where my friend lives, the Winter is a bit longer than here, I decided to go for the next size, the 56 cm. 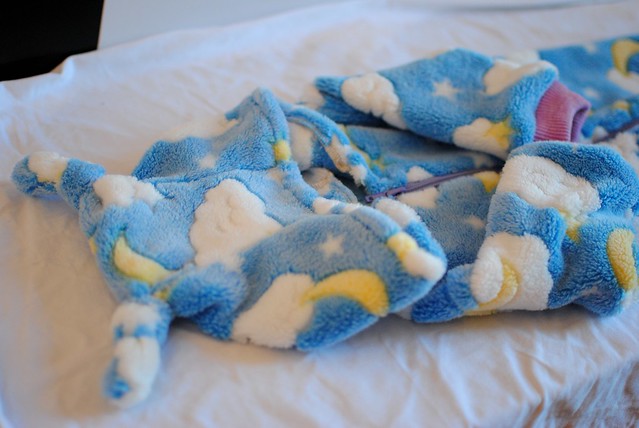 As I hate tracing, I have already quite some experience with PDF patterns, but anyway I always measure the gauge square just in case I forgot to print with no resizing. This pattern has two gauge squares, one inside the other. One is supposed to measure 3 inches, and the other 10 cm. And I said it’s supposed to measure because the one in inches is not 3 inches, but 2 7/8″ exactly. This was the first one I measured and my first thought was that I’d printed it wrong, but in fact the other was 10 cm exact. I double checked and I had printed it fine. Nordic Patterns is from Finland, and in Europe we use cm, so that could explain why the one in cm is correct, but it doesn’t justify why the other isn’t.

After printing and reading the pattern I realized it had no seam allowances. Crap. Whenever I have to add seam allowances to a pattern I feel I’m being punished by the sewing gods for having done something wrong in the past, like not making a muslin or sewing over my pins. It’s as painful as tracing patterns, with the added bonus of taping all the pages together. Boo.

Other issues I noticed on the pattern were two notches that were slightly slanted and a little mistake: when they tell you to sew the central front seam, they mean the back seam. And by the way, I just eliminated this seam, since it didn’t add anything to the garment, it was easier, and I guess a baby would be annoyed at a back seam when he’s laying on his back. 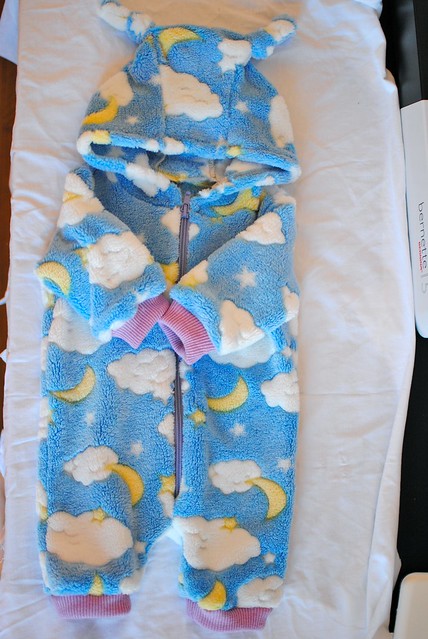 Otherwise, this came up very easily and the only issue I had was due to the fabric I chose, a plush fabric that liked to shed more than a labrador after I cut it. Good that I could serge the edges and trap all that fluff. Seriously, that constant shedding was a nightmare and was the only reason why I wanted to get over with this project as soon as possible. 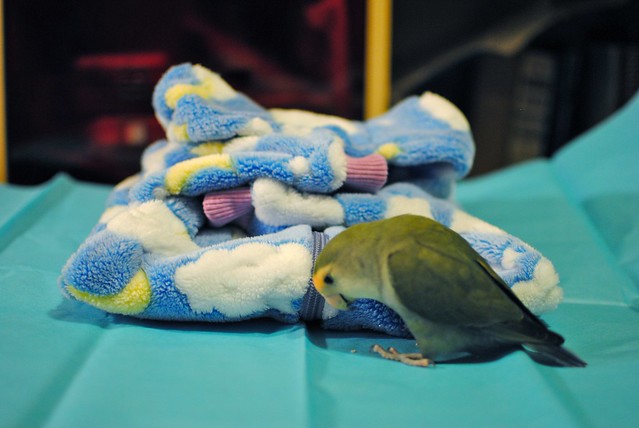 Since I don’t know when I’ll be visiting my hometown, where my friend lives, I am going to send this by post. I went to the office this morning but they had an IT issue and it was not possible to send any certified parcel. They had no idea for how long, and all they had was a warning on their screen saying that this operation was not possible. It’s incredible how automatized are things nowadays, don’t you think? Anyway, I’ll go tomorrow again to see if the warning has disappeared and the post allows me to send this to my friend. I could send it as a regular parcel, but I’ve already lost three parcels (and Koen lost one) this Christmas over the post and I don’t want to have that again. 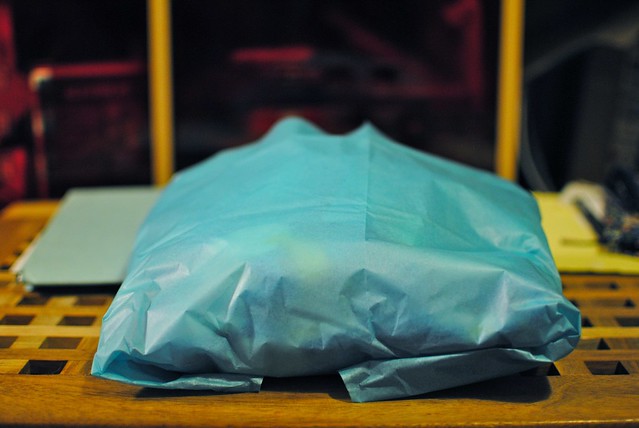 I’m already posting this because my friend doesn’t read my blog. I hope she likes it.