I usually avoid trying new yarns unless I’ve read very good comments on them. One spends so many hours working on a garment, stitch by stitch, to have in the end a horrid result, pilling, a bleeding dye and other knitter nightmares. I think pilling is one of the worst for me. I made a beautiful sweater two years ago but very soon it became a fluffy mass of pills. Tragic story. Moral of the story: never use Malabrigo Worsted for a sweater. I came upon Cascade 220 already some time ago. It’s affordable, it behaves quite well and it has gorgeous colors. The only drawback is that it’s almost impossible to find it locally. I used to buy it from France, but the shipping costs have gone from 8 to 12 euros per parcel, so I’m disliking this option more and more. We don’t have great wool brands here in Spain, and it’s a shame, since the merino sheep was originary from here. What you mostly see in shops here is acrylic. And I won’t knit it nor wear it.

Apart from shipping expenses, buying online means that you won’t be able to touch the yarn or see its real color. I have problems with very itchy yarns, and the real colors usually differ from the ones in the pictures. I usually search for a determined colorway on finished projects in Ravelry, and I more often than not, I get an approximate idea. This has saved me many headaches, until this last time. When I purchased the yarn for my Chuck, I decided to buy more yarn for two other sweaters. If I was going to pay 12 euros extra, let it be at least for three sweater yarns. I wanted a pink Hetty and a blue Marion. I didn’t think it through nor I checked the colorways in Ravelry. When they arrived, I loved the red yarn, the pink was beautiful, but the blue was not what I expected. It was more greenish than blue, but I kept a skein out of my yarn drawers just to look at it everyday and see if I got used to it or I could see it as a Marion. It was a nice shade, but it was not blue, and since wearing a green uniform for 10 years at school, I always avoided green like the plague, specially bottle green. Very recently I seemed to come at peace with it a bit with it, tried to make some green garments and I think I could adopt little amounts of green in my wardrobe. But that green skein looked less and less like a future Marion. I gave it some more time and I started to see a possible Agatha, and after seeing Dolly Clackett‘s cardigan, I made my decision. Her shade of green is very similar to mine and I love her cardigan. But I still wanted a blue Marion, and I wanted it to be my next project.

I thought of ordering again from France, but I thought of the extra 12 euros for a simple cardigan and I searched other options. I came then upon a Spanish shop in Dawanda, La Tejetienda. They don’t have many colorways, but they had a shade of blue I liked. In the beginning I wanted to go for a lighter tone, but I learned to love this electric blue.

Another thing I wanted to knit this year was another Miette. I love the one I made two years ago, and it demonstrated to be very wearable during the summer months for those moments under a museum or cafe airco. And to continue experimenting things, I wanted to knit it in green. I made my first Miette in white Cascade Sierra. It’s 20% merino and 80% cotton. That amount of cotton makes this yarn more stiff than pure wool and I didn’t like working with it, but oh boy, I do love wearing it. You can imagine how sad I was when I discovered that Cascade Yarns has discontinued Sierra. Why on earth? And from the available options in the French shop I didn’t find anything that was similar in composition and weight. La Tejetienda had some green Cascade Avalon that was 50% cotton and 50% acrylic. It’s a bit thinner than Sierra and it has acrylic, but it was affordable and the shipping expenses for both yarns (220 and Avalon) were € 3.75. I’ll have to adapt the pattern to the new yarn weight but it doesn’t worry me. 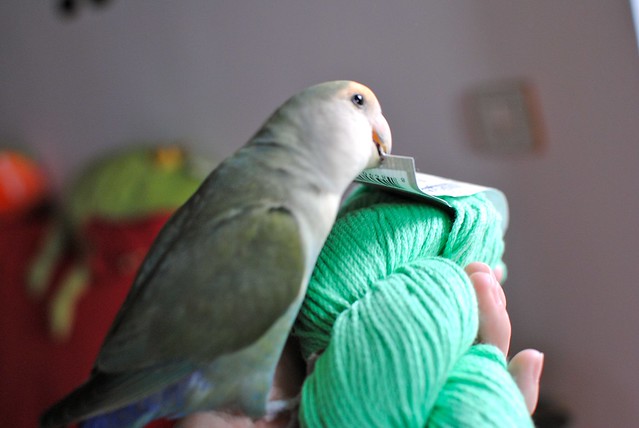 After receiving the yarns, I realized that the previous green skeins matched some fabric a bought last Christmas. I can see an Agatha and maybe a Gertie’s bombshell dress, a garment I wanted to make for already two years. 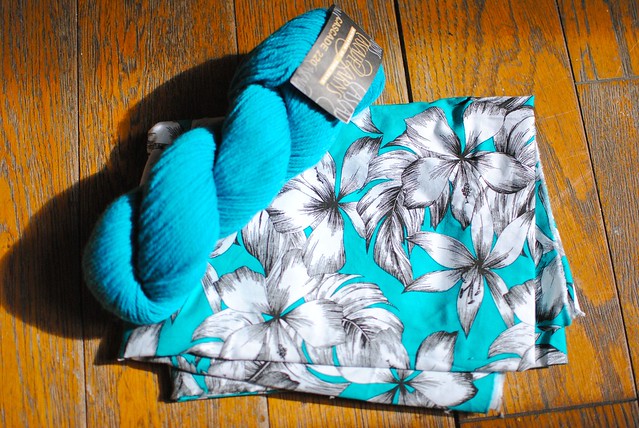 And this is one of the electric blue skeins, which curiously matches another of my fabrics. And yes, it happens to be the same, but in blue. I’ve already used part of this fabric for my Tiki shirt. 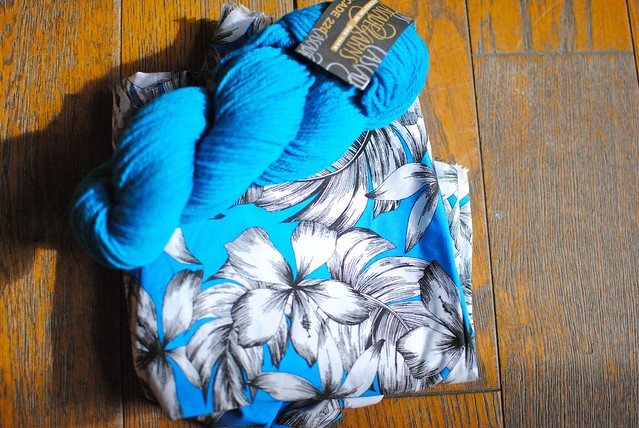 They look quite similar in the pictures, but they differ a lot in real life. 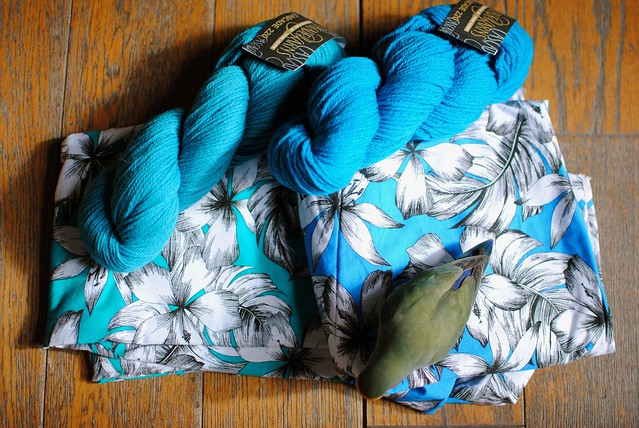 Maybe I can put some of this fabric to good use for the Vintage Pattern Pledge.