I made this little number two weekends ago, but I wanted to test it a couple of times before writing a post about it. I always wanted to try to make my underwear. I finally succeeded in sewing with knits and I’ve even made underwear for Koen twice. I tried to make a pair of knickers some time ago but sewing the elastic resulted in a red hot mess (featured in #bpsewvember). No idea why I could make bikinis without major issues. So when I heard that Amanda released a pattern of a pair of knickers without using elastic I didn’t think it twice. 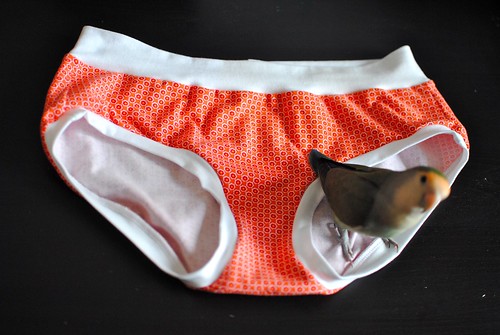 It came up quick and easy. There’s not a lot to say about the construction, since it’s very straighforward. I was in between sizes 3 and 4, and as all the knickers I’ve tried to make always came up too large (probably because I have most of my volume at the top of my thighs but not so much at my hipbones), I went with size 3. 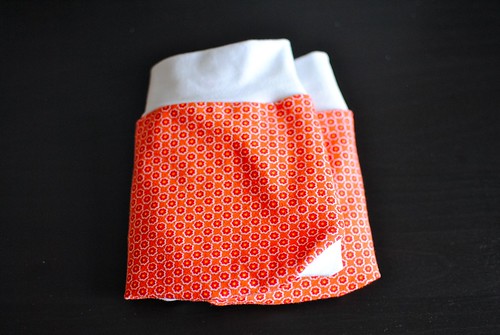 I used the remnants of my Camas Blouse. I wanted the bands in white but I thought that since this is was my first try, I was going to use all the orange fabric left, but after placing the pattern pieces on top of it, it was clear that I only had enough for the main parts. I used my serger for everything except for basting the gusset to the main piece.

And now some real pictures of how it really looks like when wearing it. It offers a bit more coverage than any bikini bottom I own, so I hope nobody gets scared when they see my bum on the internet.

The fit is very good, and the first time I wore them (last Saturday) I was impressed about how good they felt. It was like wearing sweat pants instead of jeans, if you know what I mean. It felt kind of weird not having elastics around the usual places. That day I stayed mostly home wearing loose yoga pants and I noticed that the back sides rode up a bit when I sat down. I mostly felt it when I got up and I saw myself putting it back in place several times. Not that they gave me a wedge, but I guess I like when my knickers hug my bum. That day we also danced a bit of lindy hop. I wore jeans and I have no complains there.

The second time I wore them was yesterday. I worked from home wearing my Margot Pajama Bottoms (made of cotton flannel) and it felt a bit better than with my yoga pants. I went then to do pilates and wore lightly tight yoga pants and the back sides were riding up again. That day the performance was worse with jeans than on Saturday. One could think that if they do that is because they are too small on the butt, but I digress, since when I stand up again I get some wrinkles at the center back and therefore the gusset too, and believe me, these last ones are not comfortable and it’s what ruins this underpants for me.

I have the feeling that elastics give underwear more durability. I don’t know yours, but my underwear gets quite stretched over time (I put it in the washing machine) and at some point what still holds it in shape is the elastic (before they get tossed out). These Barrie Briefs feel really wonderful the first time you put them on, but I am afraid they won’t perform so well after some washes, and even at the beginning I had issues with them.

Edited: I made another pair in a better quality fabric (at least known composition) and they seem to hold much better. I’m not addicted to this and I’m planning to make more 😀